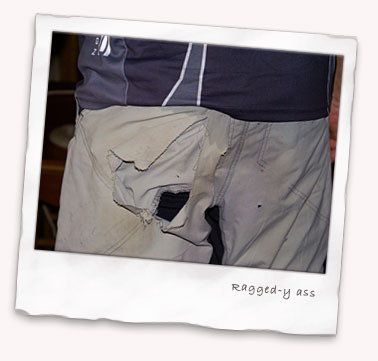 As is my custom on these fine summer evenings, I snuck down to the North Downs after work tonight for a play around.

I parked in the Holmbury YHA car park, and first off I practised some drop-offs on Telegraph Trail, just like the ladies from Astounding Adventures showed us. Then it was on to Yoghurt Pots for a couple of runs.

On Holmbury Hill, my routine was to circle the cairn and on the way back to the start of the trail I would practise lofting the front wheel; again, just like when we had the day with Astounding Adventures. Some may recall Colin’s comedy off, where he flipped over the back wheel when practising his manual and fell flat on his arse.

Tonight history repeated itself, and in exactly the same spot. This time the victim was yours truly. I have spared the world any photos of my heavily grazed left buttock, though Mrs Dandy was suitably appalled. She then lapsed into her now common refrain of, “Serves you right you daft old bugger, isn’t it time you took up golf instead?”.

For those demanding some photographic evidence of the carnage, I present a photo of the ripped shorts that have now been discarded, presenting me with the opportunity to perhaps purchase something a little more blingtastic.

Is there a moral to this story? Not really, just that if you want to improve you have to practise, and sometimes we get it wrong.

I didn’t pack up after the ‘off’, but managed another descent of Yoghurt Pots, then BKB, then played around on Surfer Rosa, or what’s left of it, before 2 more on Yoghurt Pots then Telegraph Trail back to the car park.

I hope to make it out tonight, buttock permitting.