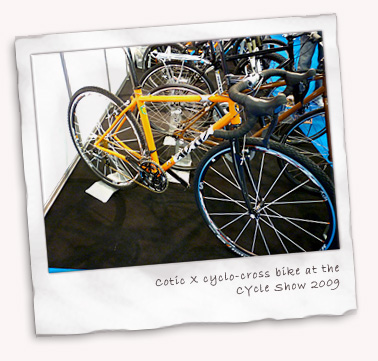 If you’re wondering what lessons to take from the Cycle Show at Earls Court this year, here’s a few thoughts.

Having got there reasonably promptly it turned out to be a long day as there was plenty to see. As I erroneously mentioned on my pre-Show post, Trek and Giant were in fact not there which was a disappointment but there was still much to suggest the Cycle industry is holding up pretty well during these tough times.

On the other hand, it somehow felt to be less crowded than recent years. Maybe there was greater floor space (although I’d swear it was the same last year) or maybe having stayed til later in the afternoon we got a chance to get onto some of the stands that were packed during the day, but it certainly seemed as though there were fewer people in attendance.

We spent the day roaming around trying to check out as much as possible which we’ll cover later this week. Our first port of call was Guy at Pearson Cycles which have a very much on-trend fixie/singlespeed commuter called the Touche – a smart ally frame with a retro raked carbon fork and a flip flop hub for £650 is pretty good and the blue paint/white panel graphics provide the finishing touch(e).

Elsewhere, we called on Mark at the Biketech stand who was having a successful first appearance at the Cycle Show. He was also sporting our new Muddymoles logo on the sleeve of his shirt so I guess that’s our first appearance too! Nice bit of embroidery…

All that aside though, what were the key themes coming through for 2010?

First off, cyclo-cross seems to be making waves. Perhaps we’re just a bit more open to the idea after our first race at D2D recently but there’s definitely a bit of momentum behind the idea. Cotic were showing their one-off Kate Potter specific X cyclo-cross bike which looked awesome in Cotic’s signature bright orange paint while elsewhere our eyes found much to enjoy in the Genesis Day One and the Ragley Rodwell in chocolate brown to name a few.

Next, what struck us quite profoundly was that the 29er phenomenon seems to have faded over here in the UK. Despite some local riders finding it to suit their tastes rather better than they expected (Dave on his Intense Spder and Lord On-one with the Gary Fisher Paragon for example) there were few 29ers at the show and no tyres that I saw to suit them. No Salsa, no Singular no nuthin’. It doesn’t affect me but I’m surprised at how quickly the 29er thing has dropped off the radar. Or perhaps it’s just fermenting a bit of a cult following and will bouce back?

On the subject of tyres in general, Continental seems a popular choice with manufacturers. The Race King in particular seemed to crop up time and again but I don’t know how that low profile tread will suit Surrey mud. Perfect for Thetford though! I also saw a few instance of the Rubber Queen which even in 2.2 guise seems a voluminous tyre. I’m still tempted for my Orange but keep wavering over the cost/performance gamble. I’d really like to try some first. Other tyres which seem much in evidence are the Schwalbe range, another manufacturer which is under represented amongst our ride group.

Finally, it has to be said colour is back in a big way. From anodised everything, including a fine looking X-0 mech in Redwin – that’s red then – to some great looking frame colours (Cotic B-Fe in blue, the Ragley range and Genesis Altitude bikes) there’s no better time for Chris King to cash in! Hope even had an anodised brown groupset (including their ‘new’ seatpost) for sale for around the £2000 mark. Basically whether you want to match your components carefully together or prefer a riot of shades there’s something for everyone available at the moment.

And if not, white is a pretty good fallback option… white frames, white shoes (Colin!), white handlebars, white brakes etc. The bike industry has it covered.

Filed under Mutterings, Trends in October 2009