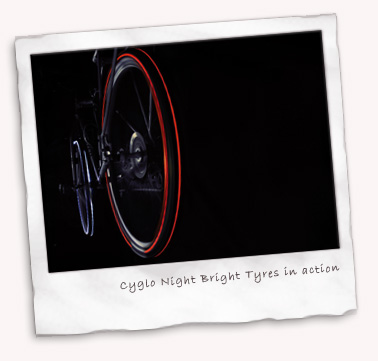 Every now and then the idea of using the motion inherrent to bicycle wheels is picked up, prodded and poked to see if there’s a way of getting something for nothing; or at least something from not very much.

I’ve seen various attempts, most notably the Sweetskinz reflective bike tyres which sadly appear to have formed yet another stub-end on the great Trail of MTB Life. I quite liked that idea too, with lairy tyre colours by day and lairy, reflective tyre patterns by night.

Unfortunately the tyres themselves appear to have been limited to urban and tarmac riding. They were never really used and reviewed off-road as even a cursory glance showed them to be rather lacking technically, apart from their reflectiveness! A shame, and now the company seems to have fallen by the wayside.

Now there’s a new company (who have nothing to do with Sweetskinz by the way!), all freshly patented up, called Night Bright Tyres. Based in the UK, they are coming at things quite differently using the same notion of wheel movement. In this case, their new Cyglo Tyre uses embedded LEDs triggered by motion sensors which can give either a flashing or constant light. The energy from the wheel turning provides the power to light the LEDs, which results in an effective visible alert to other road users.

The eye-catching effect is enhanced by having a white light at the front and red at the rear. You have to admit it looks rather interesting even if details of tread, width, compound and wheel sizing are all singularly lacking.

Night Bright Tyres’ website suggest BMX riders and ‘fashionable mountain bike enthusiasts’ might be interested in this technology. Well, I can’t speak for D’Andy but if the tyres were capable of serious off-road performance I can imagine a few of us that might try this system. Mind you the thought of a kaleidoscopic display of bikes weaving through Wiggly Wood on a night ride is a bit ‘spaceman’ to me. And knowing DaveC, he’d soon be thinking about upping the output too!

Let’s hope the idea catches on. Or not, what do our readers think?