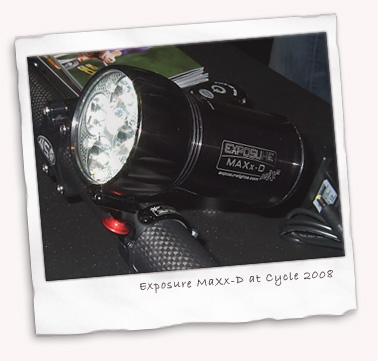 Many moons ago Dave, Nicola and myself were out on a night ride. It was just after the Hope HID had first been launched and we were speculating on how bright it was likely to be.

One thing was for sure though, there was no way any of us were going to part with the best part of 300 smackers for a bike light. How times change…

Since then, in no measurable way have I become more affluent. The world has decided, at least by the BBC’s reckoning, to crash spectacularly in stock market terms, shedding vast wads of cash (surely someone is benefiting somewhere?), I have a mortgage which is so large I can’t afford to replace my car and the banking sector has effectively been nationalised in some bizarre version of pseudo capitalism.

Yet despite the gloom that hangs over the world I am making the brave decision to ‘invest’, if such a term still has value, in a state of the art one-light-to-rule-them-all. The Exposure MaXx-D (for Daddy).

When the Hope HID came out, we all were scratching our heads as to how bright a lumen was vs a 10w halogen. I still have no sensible answer to that one. Yet after just one winter of HID ownership, most of which was spent in the shadow of Dave’s final say on light systems (with his Trailtech SCMR16 HID) I’ve decided that it’s time to pony up. So last week I ordered a new Exposure MaXx-D from Wiggle for £292.

It’s not, I think as mad as it seems. Anyone who’s ridden with Dave knows how bright his light is, yet the combination of huge energy drain and dodgy connectors, switches and lamp brackets (so far — watch this space) has been unreliable enough for me to put a high value of stuff which just works. The Exposure has 960 whatever-they-are lumens which seems sufficient in my book, plus it’s all contained in one lightweight unit which has a quick release bracket and enough modes to cover all eventualities.

I really think that’s worth the premium, which even so is mitigated somewhat by my sale of the Hope HID. At one point I mused long and hard over the Hope Vision 4 LED light and was about to buy it. But the Exposure was only £25 more, was only ¾ of the weight and had no cables or wires to worry about, plus new smartport technology which might be useful in future.

The only problem is availablility. The local bike shop has 20 on back order, which at £325 rrp is some £6500 of sales, quite a tidy amount. Wiggle, who I’ve ordered from, are out of stock until late October, showing that at least some other people share my enthusiasm but frustrating my efforts to get out on some night rides.

I’ll be doing a full review when I get mine but in the meantime Dave has offered me the chance to guinea pig his latest LED set up which I expect to take him up on this Wednesday. Will I be pig sick or relieved after that?

I really hope the answer is relieved!!