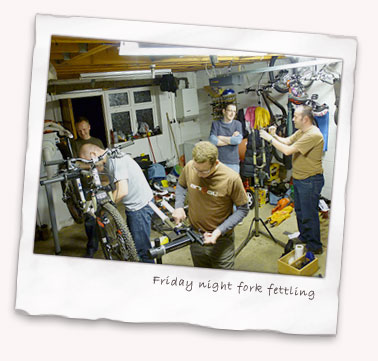 A couple of weeks back a group of us met up at Colin’s place for a Friday night of fork fettling fun. Because that’s how we roll!

Actually, thanks to Dave’s fork servicing masterclass and Colin’s hospitality it turns out to have been a very worthwhile session with nine forks and a rear shock serviced in a little over two hours.

For some reason, forks are one of those items of kit that eveyone knows should be treated with care yet few people know what to do with them; hence the flourishing Mojo/TFTuned/Chain Reaction ‘online’ service businesses. I’ve been gritting my teeth for a while at the prospect of two forks and a rear shock to service and if I’m being honest would probably have just run them until they stopped working.

Which is why Dave’s session showing us how to perform routine maintenance ourself was so useful. If my own forks are representative then everyone could benefit from giving their suspension a quick service as it’ll save you hundreds in the long run. At a guess-timate of £100 a fork then you’re looking at £900 being saved in one evening and I know JohnR, Jem and DaveC have also serviced around seven additional forks between them.

I won’t go into detail on how to do the servicing – that’s covered to an extent by our previous write up but you’d be well advised to ask Cycleworks for a tutorial evening yourself. It was certainly a strange sight at Colin’s place as we all turned up with our forks and a selection of tools, bikestands, unguents and lotions to lavish on our suspension kit.

Gathered together were Colin, JamesH, Mark, Tony, Lee and myself. We each quickly found a corner of the garage to stake out and got to work, at first a bit tentatively it must be said. By the time we’d got the first couple of forks opened up and found practically no lubricating oil inside the evening was looking like an increasingly Good Idea.

My Reba Team forks (just four months old from On-One) yielded an egg cup-full in each leg, one of which was a worrying brown sludge. The 2010 Revelation Team forks from my Orange at least had clean oil, but again very little of it and they are similarly young in age. They haven’t been ridden over the four month winter flood though. In both cases the wiper seals were completely dry, as were those of everybody else.

A few things stood out beyond the poor state of our forks though. First, seeing Tony squirt oil eight feet into the air and somehow avoiding any of it landing on himself was very funny and mightly impressive; second, I somehow managed to put my Reba lowers on back to front and didn’t notice until I was at home re-assembling the bike! Cue a tortuous effort to remove them, reverse them and reassemble with spilling any of the oil out!

Finally, helping Mark change the oil in his Marzocchi MX Pros and over filling them (due to a lack of info online for that particular model-year). Our suspicions were confirmed when he turned the forks over to do the obligatory bounce test only to find about ¾ of an inch of travel! Mind you, it has to be said those oil bath Marzocchis were in remarkably fine fettle after seven years with no servicing.

So, do get your forks serviced if you haven’t yet done so. My bike really has felt significantly better since then even though that may just be because the forks have the right air pressures in now!

Filed under Lifestyle, Mutterings in April 2010