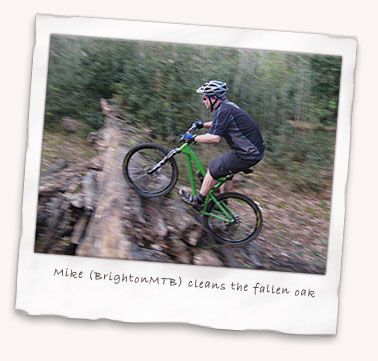 For anyone familiar with the North Downs, this picture is something you might want to ponder. It’s taken, as many of you will know en route to Abba Zabba, near White Down on a piece of singletrack which really should have a name but which, as far as I know is just the noodly bit just off Collarbone (aka the NDW).

I was sent it today by Mike from BrightonMTB who was in the area this week. Perhaps he has more skill than most of us or perhaps, being new to the trails he was just riding what was in front of him. Whatever the reason, kudos to him for attempting and cleaning this particular obstacle. I’ve been riding these woods for years and always bottled this one even though someone has clearly gone to a lot of trouble to build up both sides of what is a fairly large fallen oak.

In fact, I’ve never seen anyone attempt this before. Mike says it just needs ‘speed and commitment’ but I’m thinking a certificate vouching for your ‘special-ness’ is also needed. Maybe I’m a wuss and maybe (just maybe) it’s worth giving it a go?

As it happens, Tony and I passed that way last night, compensating for missing Wednesday’s night ride. With a touch of recent rain conditions were basically perfect but there was the occasional muddy patch to catch the unwary. We started from Bookham and threaded through Wiggly Wood, then up past Tanners and onto Badger Run and Collarbone.

With just Tony and I forming a compact group we set a pretty steady pace and after 15 miles I was pleased to see a fine 10.2mph average on the speedo. I knew I was the slower rider but was still happy with that average even though I know Tony could have gone faster. But over a decent distance and all off road I find it’s pretty difficult to stretch that readout further – after all, I only had a maximum of 23.5mph anyway so that points to how consistent we were.

Our return journey was back through Horsley and Effingham, rattling down some fast but uncompromisingly rutted singletrack at speed. My coil sprung Marzocchi Marathons have certainly seen some action this past few months but I couldn’t help wishing I had my Orange back in service. But I’m still saving for the X0 fairy…

All in all a good ride and I even cleaned the bike when I got back. Coupled with a quick road spin to Dorking and back on Tuesday—which saw me average 14.2mph over 16 miles in one gear (middle/7)!—I reckon I’ve done my exercise for the week. Sunday will see me happy to roll at whatever speed people want to set and with the rain today I’m not expecting that to be high on the fast-o-meter.