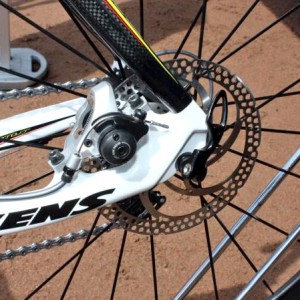 If you ask any mountain biker to name the single most effective development in their riding career, the chances are that they will say – with very little hesitation – that making the switch to hydraulic disc brakes was the best thing they have ever done.

We all know the fear which comes with knowing you are not going to be able to stop in time. An obstacle appears, the trail tightens unexpectedly or someone slows in front of you, requiring a panic-y grab at the brakes.

Then there’s those other occasions when you’re riding downhill and slowly – but surely – the momentum starts to build. What starts as a steady descent becomes increasingly wayward until you are just hanging in there for dear life with your backside way off the back of the bike.

Well, hydraulic disc brakes won’t stop any of that happening. Those scenarios can happen whatever brakes you are using. Physics is physics at the end of the day as many of us have discovered the hard way after putting too much faith in our skills and equipment.

But without doubt, disc brakes provide a much, much wider performance envelope in which to operate. This is a truism that every mountain biker knows but it wasn’t always so. In the early days of disc braking there were many who doubted it would ever have a value beyond downhill racing with many XC riders clinging to their V-brakes for years after most ‘normal’ riders had made the switch.

Now it’s the turn of road riders to have the same debate.

There’s quite a rumpus going on at the moment in the world of road cycling over the possibility that there may be a move to disc brakes for road bikes, despite no manufacturer actually having a disc brake set up to sell. What’s so striking to me is that all the arguments against are pretty much identical to the arguments made against disc brakes on mountain bikes over ten years ago.

Up to now, the issue just hasn’t been there. Pro road cycling, governed by strict rules on the type of equipment allowed for racing has banned disc brakes; so no disc brakes, or rather, they’ve never been explicitly authorised. Added to which the technology just hasn’t been there to build a lightweight hydraulic setup into the cramped confines of road ‘brifters’ (combined brake and shifter units).

With manufacturers gaining expertise – and following a relaxing of the disc ban on cyclocross racing – UCI (the sport’s governing body) have let it be known the only reason discs are banned is because no-one has seriously petitioned them to lift the ban. So the stage is set for disc brakes on road bikes.

Manufacturers are making noises about developing hydraulic disc brake models for road bikes (expected to be for the 2013 model year), with SRAM and Shimano’s braking expertise looking to be a strong advantage. Campagnolo certainly lack this at the moment but interestingly Magura have just launched a hydraulic rim brake for the new Cervelo P5 time trial bike. Quite an investment unless you have long term plans in this market.

For the benefit of the roadies then (who may have stumbled across this article), what are the benefits of hydraulic disc brakes?

I’m sure I could go on but you get the picture. Disc brakes are a mainstream technology for MTBs and no-one I know would ever seriously argue against them – be they professional racer or the proverbial weekend warrior.

Looking at discussions on road oriented websites though you’d think it was 1999 all over again as in the face of all these benefits people are variously arguing that.

And so on. You can read a representative discussion on the road.cc website where they were discussing Dura-Ace rumours recently. Obviously I’ve paraphrased for effect – I apologise for mocking – but really these arguments are nearly identical to everything we’ve heard before.

It works both ways of course (not every mountain biker is convinced by carbon for off-road bikes) but I can’t help feeling disc brakes are the way forward for roadies, especially when they see how much time they will save on those Alpine passes.

What do our readers think I wonder?

Filed under Mutterings, Trends in January 2012