Having suffered on and off for the last few years with hip pain I went in search of another solution after a recommendation from fellow Mole. 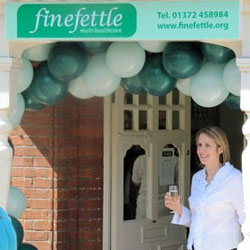 FineFettle describe themselves as a mulit-healthcare clinic and is based in Bookham, Surrey. Helen who owns the practice has attended some of Tim’s charity bike rides to provide support and he highly recommends the practice.

I phoned and Helen answered the phone, I explained I’d been recommended but had not had any long term or real solution to my hip problem. Helen was on reception that morning and hence could not see me herself but suggested I came in to see Jan, one of her ex-students.

So I duly presented myself and found the whole operation smart and professional. You can read on their website the whole spectrum of therapies that they offer and being a practising Counsellor myself I soon got into a conversation with Helen about how that was working for them. Jan arrived promptly with her previous client and after a short wait while she prepared the room I was called in.

So I explained my issue and Jan took a brief medical history before examining me for obvious issues. Jan noticed that there could be a slight loss of height between two vertabra, my hips were rotatated and she felt my main issue was muscular, requiring stretches.

So began a number of weeks of stretches at home followed by visits to Jan to have more powerful stretches administered and posture and flexibility checked. I’ve been down this road before with Osteopaths and not really got anyware but as Jan took the time to explain my condition and why the “homework” was so important I really felt that I would get somewhere. And somewhere I got.

It’s been a few months not since my first visit and I’m waking up in the morning and not being hit with the hip pain straight anymore. I know I need to keep stretching and building core muscles up to aid posture but I can deal with that. What worked for me was the honest approach and clear diagnosis. FineFettle offer so many therapies that if this hadn’t worked I could have tried an alternative which may have worked better, but I think I’ve found my answer for now and it feels great!

If you’re local, give them a call. Mention Muddymoles but I want to point out that I have recieved nothing for this review, it is my honest opinion and nothing more.

Filed under Mutterings, Tips in April 2011