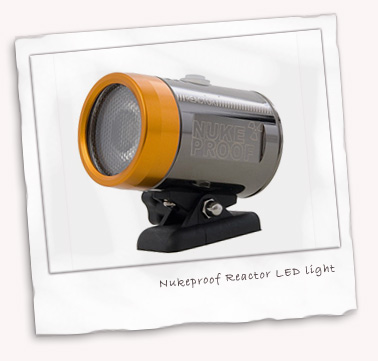 With the nights drawing in and our focus on lights (lights…focus…geddit?…oh never mind) I note that On-One (sans Brant Richards) and CRC/Hotlines (now avec Brant Richards) are currently locked into a battle with essentially the same light.

The story looks to be that the same light unit was spotted in a Chinese Trade show and with a small amount of reworking both companies have ended up with similar packages.

Chain Reaction have the Nukeproof Reactor light fresh on the market at a starting price of £199 while On-one have arrived with the LUU LED light that retails from an introductory price of £140.

Both lights utilise a SSC P7 LED which nominally produces 900 lumens of light or as our mega test—trust me, it’s coming soon—will show, more than enough lumens to ride with if managed well. I make that distinction because it is all about focus. 900 lumens of poorly focused light will be worse than 250 lumens of useful light.

Anyway I digress slightly and focus shouldn’t be an issue with either of these lights as you effectively have (at a cost in some cases) 3 options of lens. Singletrackworld have a thread that demonstrates the spot filter to give the most usable light according to one tester. Hopefully I’ll be able to tell you soon, as it looks like we’ll have to nip back into the woods to test the Nukeproof that’s on it’s way to me for test.

What is also interesting to look at is the two different marketing models of CRC and On-One. On-One represent the mini-Tesco model, pile it high, and sell it cheap although they might argue it’s more cut out the middleman and sell it direct, cheaply. CRC are a major e-tailer but selling here what is essentially an own brand item and probably their buying is considerably more bulk.

On-One seem to have adopted a weird marketing model to my mind as they are offering the basic light at a knock down price while selling all the lenses and optional AA battery pack separately (which is dedicated to their offering). I find that strange as it’s a recipe to end up with lots of accessories left over that hold a lot of profit that can’t be easily turned into cash.

Quite how either of these lights stack up to the Maxx D or the LEDSys4 remains to be seen and will be reported on this site.

We live in illuminated times.

Update Here’s the results of our tests with the Nukeproof Reactor Extreme with beam shots which we had in for review during September 2009.

Filed under Mutterings, Trends in September 2009