In an age where frivolous road use is becoming ever more frowned upon (that’s people driving, not road bikes before anyone starts!) the bike is often seen as an antidote to unnecessary car journeys, especially in a city environment.

A bike’s eco credentials are manifest, so it’s not surprising that green campaigners the world over champion cycling, putting aside the humbuggers who claim that bikes create more CO2 per mile travelled than practically anything else (due to the manufacturing). Those of us who are involved with cycling as a hobby (OK, lifestyle) have always been able to bask in this reflected glory.

For us moles, our local trails really are a mile away so we tend to actually ride to the trailhead. But ironically, for many people there’s no alternative than to get in their car and drive to the trails, negating any claim to the eco brotherhood. These days, with so many great trail venues across the country we are all actively encouraged to become biking tourists. So it begs the question, what is the most appropriate vehicle in which to do the travelling?

Well it’s safe to say it’s unlikely to be the Daihatsu Mud Master-C which the manufacturer claims can be set up to carry you and your companion of choice’s bikes and gear out into the wilds. 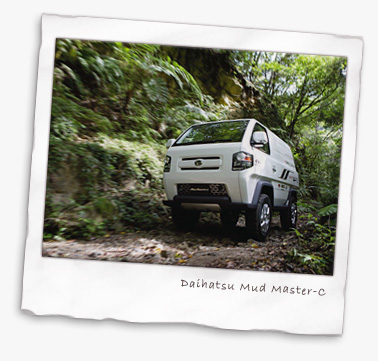 Not only does it look suspiciously like one of those silly toy vans on steroids but the prospect of spending any time bouncing along a rutted track to the trailhead in one of those things seems truly frightening. And that’s after you’ve probably just spent a day and a half on the motorway trying to cajole the thing up to a fast trot. Nothwithstanding all of that, can you imagine the derision of your fellow bikers when you turn up in that abomination. It’s worse than Mary bars! 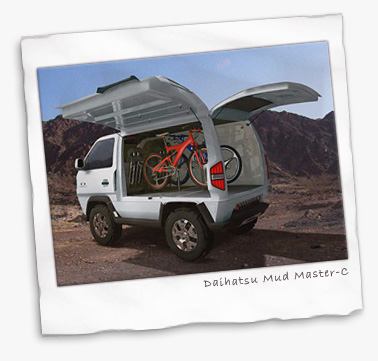 My personal favourite vehicle for transporting people and bikes has to be one of those luxury pick ups you can get, with a diesel engine, air con, a four seat double cabin and plenty of space out back for the bikes. But that’s if you really need to travel by car before you can travel by bike. Other than that, I’ve slung my bike in the back of my Ka many times.

Oh and talking about stupid car names, my favourite dates back to the eighties and the Nissan Pantry Boy Supreme (no, I’m not kidding!).