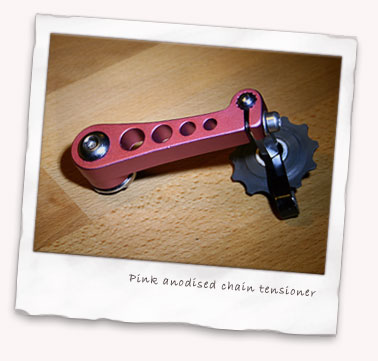 OK, now I know what you’re thinking. It really is a pink anodised singlespeed chain tensioner and I really have gone to the trouble of photographing it for your entertainment.

What’s more, come the next available opportunity I intend to go out riding with it!

A recent night ride saw the chain tensioner that Tony kindly donated for my Inbred singlespeed disintegrate over the course of a handful of miles. I’d heard it making odd noises for a few rides recently but my inner mechanic had told me to soldier on and pretend nothing was wrong.

Unfortunately, something was wrong. The bolt holding the jockey wheel on had stripped which meant that on a particularly bumpy night ride it came clean off. The good news was that I managed to keep all the constituent parts but the better news was that Del from Four4th Lights had joined us on the ride.

Del kindly offered to take it back to his engineering company and recut the thread. Having seen the finish on his Four4th lights, and sensing an opportunity to further my singlespeed theme I pushed my luck and asked him if there was any chance of anodising it!

I’m sure Del supressed a groan at that but he was far too nice to refuse, with the result that I now own a pretty much unique pink anodised chain tensioner. He even went to the trouble of replacing the jockey wheel for which I’m very grateful. I know Firefly do their own pink version but this particular one is on its own since I have no idea who originally manufactured it! (perhaps Tony would know).

Along with the chain tensioner package came a review set of Four4th MTB LED lights, a helmet and a handlebar head unit with their own dedicated batteries. To my amusement one of the head units is anodised pink too! First impressions are that these are very impressive looking lights in terms of presentation and performance. I’ll give them a couple of outings and write up my thoughts for y’all next week.

So, my pink anodising theme continues to blossom across my white Inbred. I have a pink Straitline bash ring, pink handlebars, pink Superstar bottom bracket and a pink Salsa seat clamp now joined by the chain tensioner. Ultimately I’d like some pink anodised spacers on the rear freehub and possibly a pink Chris King headset and hubs. Then I’ll stop, I promise! Actually, maybe those hubs would be a step too far?

I’m not alone though (he said, desperately trying to justify himself). The anodising craze is spreading amongst us Moles, Tony continues to hanker after an adjustable seatpost provided it comes with a gold collar to match his Trek, AndyC has a ‘special’ Pace RC405 waiting in the wings for his broken hand to mend and Erick? Well, his Lapierre is the epitome of anodised detailing. Looks great and I managed to mention a Lapierre on the same page as a write up on pink parts! Sweet!

Filed under Lifestyle, Mutterings in November 2009