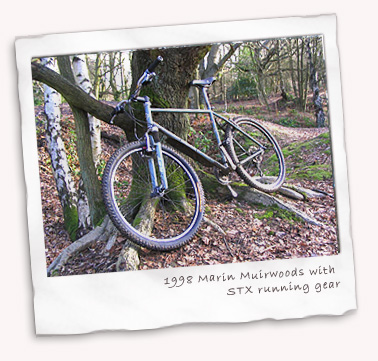 Ever since I bought my Muirwoods back in 1998 it’s been kind of retro. I mean, even back then it was obvious that RST 281 forks were somewhat limited in their abilities although it was exciting just to get a bike with any kind of suspension. The fact it had V-brakes too and cost me a then eye watering 380-odd quid also gave pause for thought.

Since then I’ve loved my Tange tubed, matt olive Marin even if Rob once explained to me that Tange was pronounced Tang-eh and not rhymed with ‘flange’ as it still amuses me to think. I’ve run it in its stock set up for a trip to the Alps, back then a much gentler proposition than today as you had to ride up before you could ride down which limits your exposure to wild descents.

Later in it’s career I upgraded the bike to wide Easton riser bars, a full 2003 Shimano LX V-braked groupset and replaced the wheels with some Mavic rimmed XC rims. In that incarnation it was a sprightly summer hack for when the trails were dry and I didn’t need disc brakes. Sure, braking distances were lengthened, followed by the snatch of brake blocks when they reached melting temperature but there was a real finesse needed for the simplest XC riding back then. Which wasn’t all that long ago.

With the arrival of my On-one Inbred—itself a retro classic these days post 456 and Brant—the Muirwoods was used to donate it’s important parts to the Inbred – in fact I still run the LX groupset on it’s original Octalink BB on the On-one.

But I never sold the Muirwoods frame. I just couldn’t bear to part with a bike which was an important part of my formative MTB years. Now it looks set to rise again in the guise of a lightweight and simple road based machine for towing my son’s tag-along, soon to be pressed into use this summer for my younger son’s introduction to Daddy doing all the work.

Tony and Dave have been generous enough to offer the few constituent parts I need to get the bike back on the road and with a small investment on my part I think it’s got plenty to offer yet. Tony has mentioned he has some old V-brake compatible wheels in his warehouse, plus possibly a chain tensioner and Dave has offered a singlespeed kit consisting of a Truvativ crank and rear gear that I can put to good use. Up front, I’m still thinking about those £85 carbon forks from Carbon Cycles which weigh in at 1.8lbs.

But it’s not going to be the straight build as I planned last year. What I’ve decided is to transfer the drivetrain back from the Inbred to the Muirwoods and to singlespeed the Inbred for use as a winter bike – this winter I’ve ridden it exclusively and absolutely loved it so getting into proper low maintenance mode for next winter seems a sensible option.

The Muirwoods will have the LX running gear back (possibly in 1×9 configuration), including the LX brakes I still have lying around and the carbon fork. All I need is a seat clamp, a seat post, a headset and stem I think and I’ll be in business with a slick tyred road bike for towing and occasional cinder path rides with my boys. And I’ll always have the option of putting MTB tyres on for a high summer blast like the old days.

The plan is to get this all sorted for Easter as it coincides with a large birthday of mine. Not quite a new bike but different, and that’s just as good in my book. In other news I’ve spread the good karma I’ve received from offers of bits by passing on my old (spare) LX front and rear derailleurs, cassette and Deore shifters to Mark so he can get his 456 running properly again. The bits feature black and gold detailing, retro enough as it is but crying out for some gold anodised KCNC jockey wheels when they finally need replacing!

Filed under Lifestyle, Mutterings in March 2009