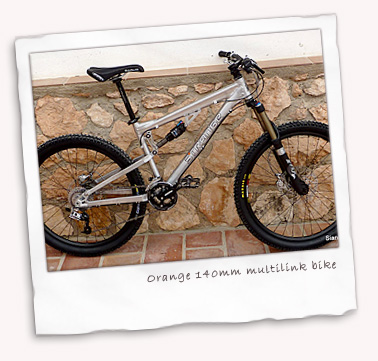 A week or so ago I noticed this bike posted to the Singletrack Flickr pool, which subsequently appeared on our MTB Pic of the Day page. I left it on there for a while, expecting people to notice and perhaps comment but it seems this went under quite a few people’s radar.

It caught my interest though as it steps on some hallowed turf currently occupied by one of the UK’s most popular bikes, the Orange Five. That bike, increasingly appears to be moving into more Alpine country, certainly some of the changes I’ve heard talked about seem to make it suitable for more rugged riding.

Which leaves a kind of 140mm, all-day-bike sized hole in the Orange range. It seems that Orange have noticed this which partly explains the existence of this Strange prototype. 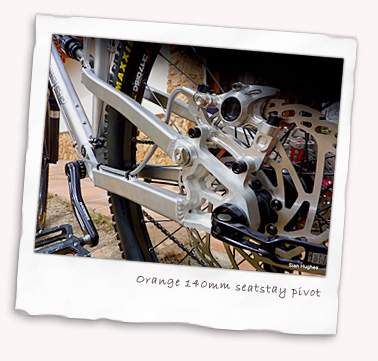 I’ve no idea if it’s set for production or if it’s not, in fact a kind of burlied up ST4. But the bike itself looks great, with masses of mud clearance on a svelte looking frame that’s quietly reinforced with some chunky gussets. It also looks as though there’s a through axle on the rear for added stiffness.

One to watch I think. I’d be intrigued to find out how it rides versus my venerable Five which continues to surprise me after three years of riding. The photos are taken from Carl and Sian’s Orange photoset on Flickr where you can see much more detailed shots.

Filed under Mutterings, Trends in June 2010