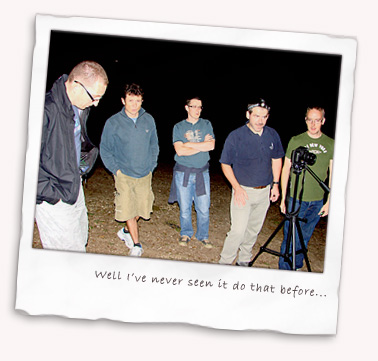 Mountain biking has evolved in many ways over the years. Suspension forks, disc brakes, long travel, rear suspension, grippy tyres. There’s always something new to look forward to and save the pennies for.

But as you can see we have actually evolved beyond the point of needing bikes at all. Last night we tramped out into the woods with nothing but a camera, tripod, workstand, a couple of handlebars and an assortment of expensive and not-so-expensive bike lights for testing. See, we know how to have fun. That’s just how we roll.

The full report and photos will appear in the next few days once I’ve absorbed the lexicon for hyperbole. Suffice to say there’s a clear winner and an exclusive review coming which goes to show that in the mountain biking world the evolution I talked about is no-where more rapid than in lighting technology.

Tony had thought the furthest ahead and actually had his crash helmet with his helmet lamp to light our way. But then, he’s had a lot of time to think recently. Our meta physical test bike consisted more of the idea of a bike than an actual machine as such. We had my workstand ready to hold a set of handlebars at roughly the height you’d expect handlebars to be. Behind that, my tripod and SLR were set at about head height to give a reasonable riders-eye perspective on things. Add a few reflective ankle bands at some distance down the trail and we were set to go.

It’s more complicated than it looks though to take shots like this in the dark. For a start, focussing the damn camera was a bit of an effort and we spent some time fiddling with the manual focus. Hopefully the shots have come out OK but I won’t be able to check them out until later. We think they’re OK…

The actual process of taking the shots was simple enough – set the auto timer so the camera didn’t shake, same aperture and long exposure for each shot and off we went. Very simple, once Tony had learned that the click of the shutter opening didn’t mean he could turn on his helmet light to see what he was doing with the clipboard!!

The rest of us (Lee, Jem, Mark and myself) helped out with lots of helpful advice to DaveC and Tony as they worked through the shots. Quite a wide range of lights, with most putting in a creditable performance. Bizarrely at one point we were accosted by some runners with an infeasibly large Alaskan Malamute (that’s not a euphemism!) who turned out to be a Mountain Bikers too. It’s amazing what you see in those woods… Last week Colin ran over a badger you know…

We also saw Liam from Cycleworks with his mates out on a night ride. Yes, I realise how odd we must have looked all standing around suspiciously in the dark but at least it meant we saw a real mountain bike during the course of the evening.

With all the shots taken we retired to the pub to discuss our findings and drink beer. Mainly drink beer and over-hype ourselves at the prospect of our Dusk til Dawn ‘race’ coming soon. In all a great evening and a lot of fun.

See the results of the beam shots in our MTB LED Night Light Test and Beam Shots article.