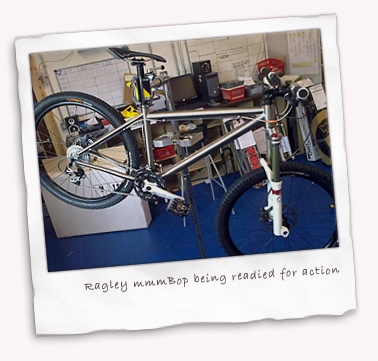 Of late I’ve been a bit quiet on the subject of Ragley Bikes. Not that there hasn’t been anything to say, the product pipeline seems to be filling nicely but because, well, I don’t want to push a point. After all, there’s still few people outside the bike press who have ridden one and for all they look great on paper there’s nothing like a bit of feedback from real riders to put things in perspective.

Having said all that, the Ragley range (now a brand after Tweak bikes was found to be treading on Demon Tweeks toes) looks to have plenty of bases covered.

So what is there in the range? Well, top of the line is the Ragley Ti a £1300 titanium hardtail made by Lynskey over in the US and coming with a lifetime warranty. Not bad considering what Lynskey’s normally retail at without Brant’s leftfield input which so often delivers the goods.

Next in line is the £259 Blue Pig, best described as a steel framed version of the Ti but with specific modifications to suit the frame material such as a tapered headtube brace and bridgeless seatstays. Without wishing to pigeon hole the bike it looks to me like a grown up Inbred classic rather than a ‘different 456’ but we’ll have to see. What I mean is the ride on the Inbred classic was every bit as important as the handling and I suspect that’s very much in the Blue Pig’s sights.

And finally, comes the mmmBop, the aluminium framed interpretation of the Ragley philosophy. Not only is this frame nearly 2lbs lighter than the Blue Pig but it also has it’s own tricks up its sleeve, most notably an oversized headtube to let you run butch forks, tapered forks or give you some geometry adjustment through step down spacers with a regular fork. A fat downtube and variable profile top tube also promises a sprightly zip of a ride and it’s definitely a steal (no pun intended!) at just £275.

Both the Blue Pig and the mmmBop come in some great looking colours too. All of them appeal apart from black, but my favourite is the Skwosh (pumpkin orange) of the Blue Pig. That said, the Quick Lime mmmBop is very striking and shows DaveP was well ahead of his time with his choice of colour on his Five! Thank God we’ve got people prepared to be bold with their frame colours I say.

You’d think that would be enough for Ragley for now though but think again. Still to break cover is the Ragley Rodwell, a £450 cyclocross frame and fork package due at the end of August and a range of components that are starting to filter through. So far, we’ve been teased with the possibility of more unusual handlebars (which will interest Dave, an unashamed Mary bar fan) and now I’ve found out there’s lock on grips in the pipeline with anodised alloy clamps and end caps. My ideal has to be pink clamps and white grips for my Inbred singlespeed but I fancy the black and red combo for my Five too…

So, that’s where we are so far and you just know there’s going to be plenty more too. Stay tuned.

Filed under Mutterings, Trends in May 2009