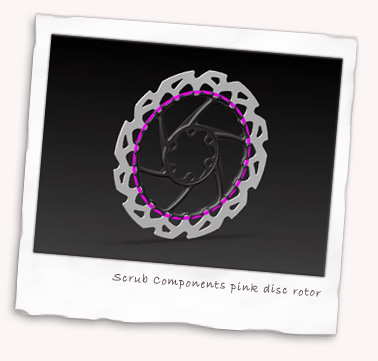 Scanning the output on Bikeradar from the North American Handmade Bike Show (NAHBS) is a fascinating exercise as you never know what might appear. Rapha have their ‘casual’ range of clothing, Paul Components now offer a BB mounted chain device and… Scrub Components have a floating rotor that looks as though it comes with pink detailing. Bliss!

Until I saw this, I had no idea that I wanted my Avid Clean Sweep rotors on my Elixir Fives to be more bling. But it doesn’t take long to appreciate not only that the white and pink combo looks terrific—if you have a white and pink themed singlespeed of course)—but that the metal matrix braking surface, aluminium carrier and a target weight of just 65g! offers real braking gains.

What’s not in doubt is that cost will be a factor here and I doubt eBaying my current rotors will make much of a dent in the final bill. Their ‘standard’ workhorse rotors come in at $145 for a 160mm rotor so maybe I’ll just have to stick with old fashioned steel for a little longer hmmm?

Filed under Mutterings, Trends in March 2010