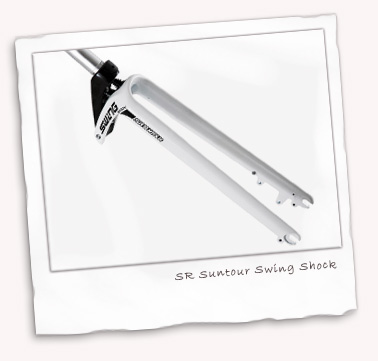 Well, when I say crowd, obviously it’s only really Dave isn’t it until and unless our race whippets decide that 29ers are the way to go racing. I’m not necessarily convinced either way but that’s a separate discussion. This post is all about the news that Suntour have developed a short travel suspension fork for the commuter/road/fixie market.

My initial thoughts on seeing this were shaded very much by memories of the old Girvin flexstem, a terrifying combination of pivot bolts that worked loose and elastomer ‘damping’. Rudimentary.

The Swing Shock that Suntour are touting has moved the general idea from the handlebars to the top of the fork crown. There’s only one real pivot which the steerer tube cantilevers around, damped again by an elastomer with compression handled by a coil spring. It’s designed to provide around 30mm of travel and weighs just 1300g which is pretty light.

The target market is the commuter/fixie crowd wanting to take some of the urban buzz out of their hands but since it’s a 700c fork (or 29er to us MTBers) and it come with post mount fixings for disc brakes I can’t help but think it might have an application for 29er riders.

It kind of feels like going backward to step forwards technology-wise, although it could prove a relatively low-maintenance enhancement to 29er riding. Or, it could prove to be an unreliable, franky scary way to go about tackling Deliverance.

Perhaps Dave will be able to find out for us!!

Filed under Mutterings, Trends in October 2010