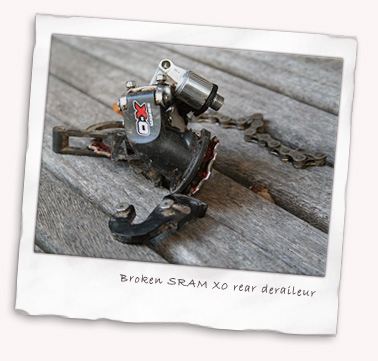 A long time ago, in a land where leaves were falling off trees and damp was both rising from the ground and falling from the sky, I was unlucky enough to break a component that was top of my list of ‘things I didn’t want to break’. My SRAM X0 rear derailleur.

Six months later, having ridden my winter hardtail exclusively since then I’ve finally got round to putting my Orange Five back into service. With it’s chunky good looks, bolt through Pikes up front and disc brakes that really work, plus the small matter of perfectly dry ‘summer’ trails I’ve been starting to hanker recently for a bit of variety from the hardtail diet I’ve been consuming since trashing my rear mech back in November.

Don’t get me wrong, I’m loving my Inbred, especially in singlespeed guise but when there’s a five inch full susser collecting cobwebs in the garage it seems a bit obtuse to limit yourself to just one bike. So on Saturday I called in to my local bike shop (Cycleworks in Leatherhead) with a sense of trepidation and a carrier bag of broken SRAM X0 parts to find out just exactly what I’d managed to break when that fallen tree branch trapped itself in my gears in the Autumn.

Well, I wasn’t exactly surprised. First off was the derailleur cage which had clearly suffered a catastrophic failure—catastrophic particularly for my wallet. What I hadn’t realised was that I’d also broken off the B-limit screw which would need drilling out and re-tapping as well as a new mech hanger – the new hanger at least is reasonable since I’d rather buy one of those than a new frame; I can thank Orange’s insite for that though.

The total cost was (at retail) £96 for the dérailleur cage which includes the jockey wheels, tension spring and front and back plates, £20 to retap the screw plus some odd change for the part and £15 for the mech hanger. A total cost of £131. Now I may be a bit naive here but that’s outrageous!

When I got my bike I was a bit hesitant about fitting a £180 (retail) rear mech on it, reasoning it was only a matter of time before the inevitable happened. But for one reason or another, I couldn’t refuse the deal I was offered and was comforted by the knowledge that spare parts were available should the worst happen. But now I find I’m in the position of being fleeced by the manufacturer for the main part (the cage) in order to get my bike back on the trails, and that’s ridiculous.

To show just how ridiculous it is, I can get a complete X0 rear mech discounted from Chain Reaction Cycles for £145 and similar prices elsewhere on the internet. But I would think twice about paying that price myself so to pay £130 for a repair of a used mech seems like a non starter to me. Looking further the sensible options seems to be an X9 derailleur for a discounted £60 plus the hanger – £75 in total and I’m back up and running.

Frankly I’m pretty hacked off. If someone has ‘invested’ in your brand at least have the decency to look after them, not treat them like a cash cow. Add these costs to the ongoing replacement cost of £35 for X0 jockey wheel pairs, £32 for PC991 chains and so on and you start to think a switch back to Shimano is the only sensible choice.

I love the directness of SRAM gear shifting over the opposition and it’s always performed faultlessly. I know this is top end gear and will pay for that performance but no-one likes to feel they’re being taken advantage of do they? Especially when you think that people running this stuff could potentially be a company’s best adverts if they were treated better. At the end of the day all I’m asking for is for SRAM to show a greater regard for their customers long term. Short term, it’s X9 for me and the disappointing feeling I’ve had to step down the ladder but long term I’m wondering if Shimano XT or Saint would be a better bet for my Five.

Sorry for the rant folks. But really, this affects everyone!

Filed under Mutterings, Trends in May 2009