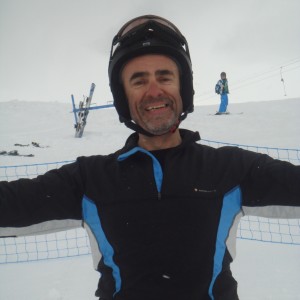 Following a post a few weeks back in ‘The Mole Hole’, some of you will be aware that I have succumbed to ‘I’m eligible for another bike under the Bike-2-Work scheme and I just can’t say no’ syndrome. This increases my bike fleet to 7.

So, how to break the good news to La Dandina, who is of the opinion that I can’t possibly need another bike? And why am I looking so pleased with myself in this picture? All will be revealed…

Out in the French Alps on a late skiing holiday with both La Dandina and the Dandinetta, I found what I thought was the perfect opportunity to take advantage of some recently accrued goodwill to mention bike number 7.

Without supplying too much detail, I found myself crawling out of bed at 00.30 and dragging a very cold and reluctant Saab out of its (relatively) warm underground car park onto the slippery roads coated with two inches of snow. For ‘reluctant Saab’ read ‘reluctant Dandy’. I dutifully rescued a ‘tired and emotional’ Dandinetta and returned her to the safety of our apartment.

Having braved the wild and dangerous terrain lurking outside, I felt able to accept the adulation and gratitude of La Dandina for rescuing our precious daughter. Would now be a good time to mention that I’ve signed up for another bike, I ventured?

Thinking I’d got away with it, not much more was said about this new addition, and on occasion I began to think through the routes that a combination of weak legs and a single speed would allow.

Somehow, on Wednesday afternoon we found ourselves in the ‘Snow Park’ with a variety of drops and jumps to sample. I’m not sure I can recall how exactly, but the conversation became, “If you don’t want to ski the waterslide then you don’t want another bike!” Our skiing party all agreed that if I didn’t ‘man up’ for the slide, then I shouldn’t have the new bike 🙁

Prudently I handed my Blackberry, wallet and spare rubbish to a startled La Dandinetta. Without too much thinking, it was “On the piste again!” for my battlecry, before heading off down the slope. After a couple of small checks (see video ) it was time to let the skis run and take my chances. As you can see in the link, I successfully won the right to Bike No. 7.

Now, how to explain to La Dandina the appearance of a Troy Lee top in the same shade of light blue and orange as the new Cannondale 29er SS ?