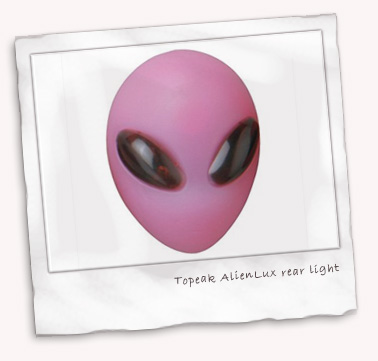 Could the Topeak AlienLux be the ultimate light for my pink accented singlespeed?

It’s a sign that you’ve probably reached the limit of color co-ordination on your bike when you start wondering about buying a matching rear light. But having seen this recently I was struck by it’s cuteness (oh dear!) and couldn’t help thinking how appropriate it would be on my pink singlespeed.

Sporting twin rear LEDs the Topeak AlienLux doesn’t appear to offer a great deal of light output but more than makes up for that by being a ‘talking point’. Which will be nice when they pick me up from the tarmac after being struck from behind by a driver claiming SMIDSY (Sorry Mate I Didn’t See You). Maybe I’m exploring the customisation trend a bit too much though. Certainly, I feel as though my Jey-dar should be twitching more than it is.

But a rear light, shaped like an alien with bulging red LED eyes sounds fine to me, and AndyC will surely be interested to hear that a green version is also available for his pimp machine. You have to press the alien’s forehead (not Andy’s) to turn it on. Cool!

On a serious note, I probably would go for this if the Alienlux wasn’t powered by two throw-away button cells which seems unnecessarily wasteful. It might be part of a growing trend too, with Exposure’s Spark also running on disposable batteries which seems a retrograde step in my view.

Filed under Mutterings, Trends in February 2010