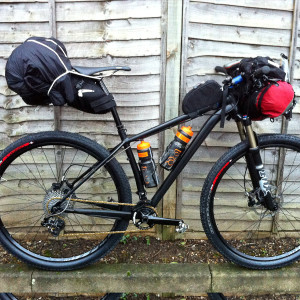 Well by the time you read this I should be enroute to South Africa or – fingers crossed – be there… with bike and my pinners, which are way too small by the way.

Having picked them up from the Post Office, after paying customs (errr greedy UK), the guy handed me the box and my first thought was, they are no way big enough in a box that small.

I hate being correct, but that gut feeling serves me well. After heading to the camping shop I sort my bags out. It took a whole day trying to work out what’s the best way of using them on the bike. I know I’m heading for problems, but will have to work it out along the way.

So my plan here is to arrive In Port Elizabeth in South Africa and ride all the way to Cape town in time for the Cape Epic to start. No, Adam and I are not racing it this year but we will 2014.

To be honest I have no plans but to arrive in CT “Cape Town” to see some old windsurfing friends and try and blag some windsurfing kit off some of them. Being pros, they should have some kit kicking around. The real plan I have is to ride as many purpose built trails enroute to CT.

Some of the trails are on National Parks and some on wine estates. I’m hoping to stay off tar roads as much as possible and as one guy said, if you’re not lost, you’re not enjoying yourself!!

We’ll see about that one.

I’ve got a 29er Stumpjumper Evo, I guess it’s not what you would call a touring bike as it’s a 1×10! Yep, only one ring up front and I know I’m going up some BIG hills. I’m a sucker.

As I tried to pick the bike up, I almost put my back out, it weighs a tonne, it’s going to be one hell of a mission getting up the hills. As you can see from the photos I’m going light, not much to carry. I have my £50 tent which weighs 1.9kg and the rest, well, let’s just say, I’ve not given much thought to this whole thing.

Plotting a route, again is something I’ve kind of got off the web site called mtbroutes.co.za , well it’s not a route exactly, just places to visit, the bit from trail to trail is going to be the fun bit – I hope.

Someone has said to ask the bike shops along the route, they can give me advice. As for sleeping, it’s tent in campsites, or if I’m real lucky I’ll B&B it. But I don’t hold up much luck on the luxury side of things. I’m planning to ride 60-120km a day & have 5-6 weeks to ride it. Plus I want to spend a week in CT.

I’m not going to have computer or phone, just an iPod for company, as South Africa is so big, I guess the phones won’t work there all the time. Just bliss. So it will give me time to enjoy myself. I’ve always wanted to tour the garden route, so this is my time…

This is to see if I’m going to like this sort of thing as I’ve been planning and plotting the John O’Groats to Land’s End off road via trail centres, which includes Wales coast to coast North to South. 1500km, so far it’s taken 11 days research to date.

Filed under Lifestyle, Mutterings in February 2013