I have to confess again that I was sceptical of this tubeless tyre lark. I dodged the issue by having slime tubes, by taking the p!ss when Matt cut a new tyre on it’s first ride and by taking the p!ss again as his tyres wee’d latex all over his foot and refused to seal. 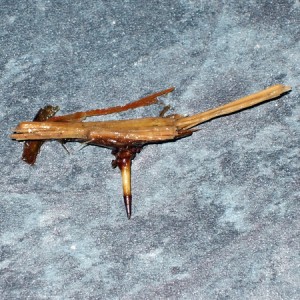 However, there comes a time in ones life when you’re sat at the side of a muddy trail, with a muddy tyre, fighting to get it off the rim to change the tube, forgetting to check the tyre for thorns after you inflate the new tube and having to repeat the whole process again when you decide there might be something in it.

So, for me the change started on the 5. Mavic 819 UST rims please, on Hope Pro2 hubs with a Maxxis Advantage LUST on the front and Maxxis Crossmark LUST on the back. I bought the wheels and tyres from Cycleworks and took them home ready to do battle. I’m blessed with a  compressor in the garage and having previously tried to help Tony with a  Bontrager Tubeless conversion, not to mention a few Mole stories about near fainting, red faced episodes of pumping I was expecting some work ahead.

Well how wrong could I have been? The Maxxis tyres popped on without a hitch, I did a test inflation and they went up first time. I let them down again, popped in some Stan’s fluid and up they went again. Fit and forget.

Well over 8 months after fitting them and having swapped the rear tyre I find that I seldom have to check the pressure, they just work and sit there. Sit there they do a lot, as the 5 gets infrequent use unless gravity is involved. They did a CwmDown session though and a few days cycling in Wales and took it in their stride.

It was a similar story with some UST standard Shimano MT65 (SLX spec.) wheels that I later bought and now sit on Cathie’s Cipher. It’s a shame UST tyres are a bit on the heavy side and it looks like most manufacturers are now moving to lighter “Tubeless ready” tyres but the wheels will still be OK even with those.

With UST on the way out and not much action on the 29er front I said “hello” to Stan and asked him to show me his Flow. As last year progressed Cycleworks again built me wheels based on Stan’s 29er Flow rims. 2 sets of white rims and one set of black rims. The biggest issue I had was trying to get hold of the things!

The obvious difference between UST and Stan’s system is the need for rim tape. UST has no internal spoke holes whereas Stan’s rims look quite normal in comparison. A special yellow tape does the job of sealing the rim though and if you use non tubeless tyres a second layer can help. Again, with 29er choice still limited this helps you ride the tyre you want.

The process is a little more complicated here than UST and a little soapy water can help. Soap the rim, pop the tyre on and inflate. At 40PSI the tyre should have popped into place. Repeat with sealant and then soap the tyre walls to look for air bubbles.

Now, if you are using a non tubeless ready tyre expect to see lots of air loss on the side wall. Shlosh the sealant around the tyre and lay it flat on top of a bucket. Come back in 20-30 minutes and repeat, laying the tyre on the other side. You may need to repeat this a few times and put more air in but you should see less air loss and eventually it should drop to a level where it does not go soft overnight.

I’ve successfully fitted Schwalbe Little Alberts, Kenda Nevegals and others using this technique and they have been fine. But do it at your own risk as they are NOT designed or sold to be used this way (that should keep the Lawyers happy).

Interestingly I had pretty much the same experience with a Specialized The Captain tyre which is supposed to be 2Bliss. This is off my recommended list! Bontrager Mud-X which are Tubeless ready simply fitted, inflated and lost no air. Even on Cathies bike where I had used a Joe’s No Flats conversion kit on Mavic 317 rims the Mud-X when on pretty much first time. There was a bit of airloss but the bucket process sorted that out really quickly.

After the femoles Saturday ride I was hosing down Cathie’s bike when I pulled a thorn out of the front tyres and a thorn out of the rear. Each time I got air loss, rotated the wheel so the hole was at the bottom, out sprayed some latex and then it stopped. Job done, they work. The piece of wood in the Nevegal did take some believing but there is the evidence, that worked as well. 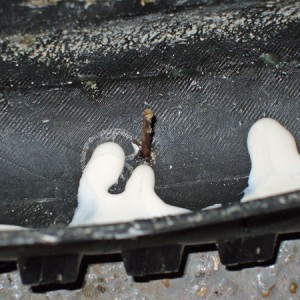 In summary modern tyres and modern wheels work really well. Conversion kits seem to work as well but the is a little more faffing to do to get the seal stable. I’ve not had to repair a tyre yet, the Nevegal is well past its use by date and will hit the bin soon but I do have a kit in the garage and Jem has shown me how to thread the sticky rubber “worm” into the tyre so it’s just a matter of time for that.

It’s not going to stop all punctures, just a lot of them.