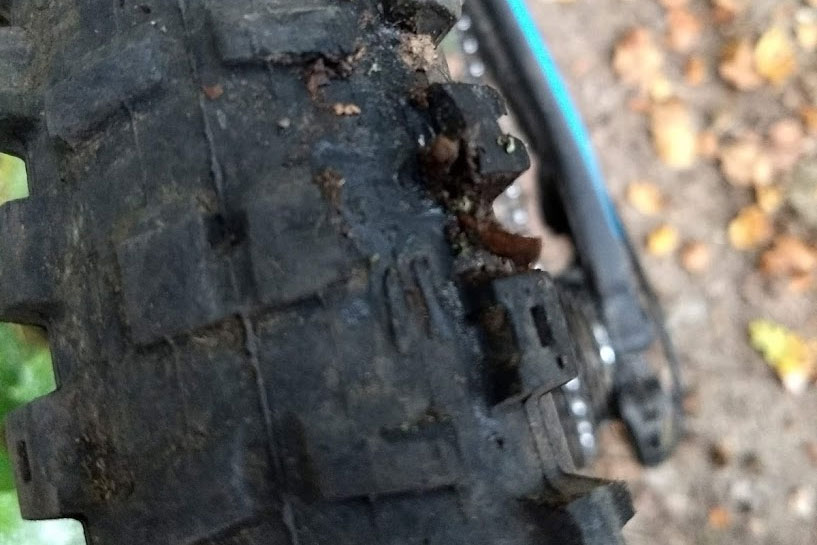 Well there’s a first time for everything isn’t there?

In this case, that’s the first time I’ve suffered a catastrophic failure on a tubeless tyre in over ten years, since I first saw the light and converted from old-fashioned inner tubes. What you’re looking at here is a very badly ripped side knob on a Onza Ibex.

Sadly, it put paid to my ride. Heading home this evening with my commuting buddy Mark, I left him at Nower Wood, heading toward Alsation. I turned in the opposite direction, to tackle Lloyd’s Left Leg and then Vietcong.

Except I never really got there. In contrast to last Wednesday’s night ride where a day of rain had left the trails feeling sketchy at best, today they were good in the way a late summer trail really ought to be.

I set off on the long meander that is Lloyd’s Left Leg (!), with my saddle right down and a sense of anticipation. Within a half dozen turns I heard a sudden bang as the rear tyre let go and quickly had to pull the Jeffsy up. And that, as they say, was that.

Surveying the damage I found a 1cm gash in the tyre, nearly tearing off one of the side knobs on the Onza Ibex. How I managed that on dry, groomed trails is anyone’s guess but you can’t argue with the evidence. Seeing the goo wouldn’t seal on it’s own I plugged in a sticky worm and set about pumping air back in, but the damage was done.

Those few yards bringing the bike to a halt had broken the seal on the tubeless set-up. There was no way I was going to re-seat it either. Still, no matter I thought, I’ll put a tube in… but where are my tyre levers..? Back at home was the answer! And I only had a road tube as well, both oversights the consequence of continually swapping road bikes for MTB and vice versa.

So it was time to walk. At least half a mile back to the Nower Wood car park. My wife was still at work, so I had to phone Mark and ask him to turn round when he got home and bring his car with him. Thankfully after 20 minutes of so, my chauffeur arrived.

I’ve never been big on those Onza Ibex tyres; as luck would have it, sitting in the garage are the ideal replacement in the form of a pair of Specialized tyres that I have been running on my recently-dismantled Kona. At least now I have the incentive to get on with the swap, even if today left me feeling very short-changed indeed!

If you’ve been going a bit Enduro-lite on your tool needs recently, it might be worth reviewing the kit you carry as well.