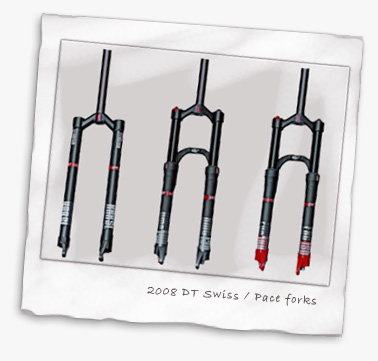 Late last year DT Swiss bought Pace in a surprise move. A surprise that is to the many patriotic English Mountain Bikers of this world, although taking a step back this sort of thing is now the way of the world. And there are many reasons why this could be a positive purchase for both sides.

Pace have always been known for developing some great products but probably have a similarly high reputation for quality problems as well (if a little unfairly, I can’t say having not owned any Pace products so far). But with DT Swiss onboard there’s a good chance that quality can improve, assuming the basic product design is right in the first place.

From the Swiss end of the lens, having an innovative fork brand in its’ stable helps it compete with other large scale, multi component outfits, plus there’s a good fit with their rear shock business, allowing them to offer a complete suspension package.

Even so, the Pace buyout came as a bit of a shock (no pun intended), in many people’s minds as unthinkable as Hope selling out to SRAM or Shimano. But never say never I guess.

Now, DT Swiss have launched the first fruits from their purchase and so far it is limited to some cosmetic tinkering with the forks’ branding and a seeming reduction in the Pace range. I guess, given the talk of reputations above, DT Swiss are likely to concentrate on the reliability issues first before getting more ambitious and it’s not as if the range is lacking technically anyway.

Given the emotive nature of the DT Swiss / Pace association it’s no surprise that the new branding appears pretty divisive. Personally, for what it is worth I think the forks look great. I like the concentration on DT Swiss’ house colours and was never a particular fan of Pace’s tribal tattoo look anyway.

So we’ll have to see what time will bring. But I’m hoping to build a singlespeed with a pair of those XRR SL ti rigid carbon forks at some point…

More information on 2008 DT Swiss / Pace forks is available on the Singletrack website.