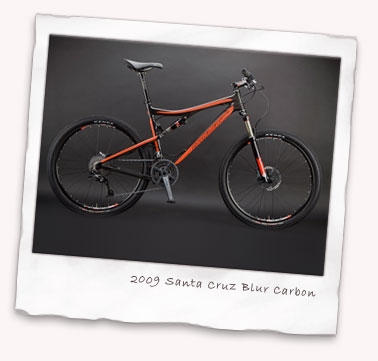 Hot on the heels of a whole raft of changes with Intense’s product line up come news of the cult Californian manufacturer Santa Cruz taking its first step into the brave new world of carbon.

This week the internet has been peppered with reports of the new Santa Cruz Carbon Blur, with Bike magazine, Singletrack and Bikemagic being just three of the many sites running stories.

It has a frameweight of 4.2lbs versus over a pound more for the ‘old’ aluminium version so it’s certainly been worth it from a weight point of view. There’s also plenty of claims of frame strength and reliability (from SC and Intense’s new longer life bearing arrangement).

I’m in two minds about it personally. Firstly, the frame comes with a Rock Shox Monarch shock, a light but less than stellar performing shock whereas a Fox or even a DT Swiss carbon shock would have been nice (okay, I know Santa Cruz claim the suspension eliminates bob). Plus it’s something of a risk (and on a racy bike, a high profile risk) to start building with a different frame material than you have up to now. Santa Cruz will claim years of development I’m sure but not every manufacturer can hit the ground running with the carbon thing.

On the other hand, it sure looks like it’ll work!! Passing on the orange graphics, the frame itself looks sweet with no curves–for–the–sake–of–curves. That said, even the disc mounts come in carbon so it looks a pretty trick bike.

Time will tell. As always, bearing life, mud clearance and cable routing will matter more in UK conditions. And does it have a forward facing seat post slot? Hmmm? Regardless, I’d like to point out I’ll always be happy to give one a test if anyone’s interested…