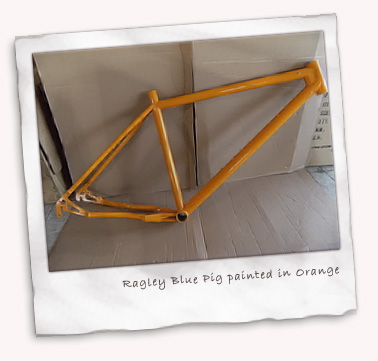 Mark would love it. Given his previous bike before his 456 was a 1999 Marin Nail Trail in all it’s turn of the century metallic yellow glory I’m pretty sure a bright orangey/yellow Blue Pig would be high on his list. Unfortunately he’s running out of organs to sell.

I’m a bit surprised at how the steady drip feed of information from Shedfire about the Ragley project is keeping me busy adding posts to this site! With Sea Otter upon us you’d think I could find something else to write about (I am keeping my eyes peeled on that one), but the micro-micro brand from Calderdale is punching well above it’s weight in terms of publicity.

There’s definitely an appetite for the information even though to most people outside the UK it might not seem too important. After all, Shedfire are not the only company out there making effective price-conscious bikes are they? It’s just those other brands don’t appear to be producing much that’s different or making much of a fuss about it if they are. Maybe Shedfire just ‘gets’ the internet?

I’d be happy to big up some of our other home grown micro brands if only I could see a bit of what they’re up to. I had to stop myself writing about Shedfire’s curious Ti handlebars for instance, or their new cable guides. So come on competitors, step up! I’m not the only one keen to see a thriving micro-bike culture driving the industry onward. 29ers, 69ers, 26 XC or Alpine – there’s plenty of niches out there, even, dare I say it 650B?!