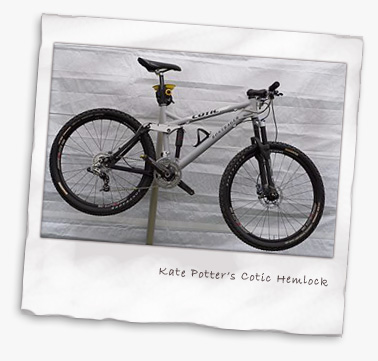 I confess to a state of ignorance when it comes to Cotics, never having tried one of their popular (relatively) 853 hardtails, although I’ve seen a few out on the local Surrey trails.

I’ve always had a bit of a hankering for one even though they might prove just a bit too burly for my kind of riding and of course, running an On-One means the space for an entertaining hardtail in my stable (correction: my over-filled garage) is limited.

Now Cotic have launched their first full suspension model, the Cotic Hemlock just after I’ve committed to a new Orange Five, so it’s unlikely I’ll be able to write a review on one any time soon.

Which is a pity, because the new Cotic Hemlock looks like an interesting addition to the scene. The Hemlock has been designed from the start to be as versatile as possible. So, the rocker arm on this frame (which might be a faux bar, 4 bar or single pivot arrangement, I can’t tell) is available in two different lengths resulting in two different amounts of travel.

Similarly, at the front the frame has been designed to take a wide range of fork travel so you can build it up into a fast four inch travel machine (and pretty light too by all accounts), or you can build it into a tough, longish travel All Mountain machine instead. Or, why not somewhere in between?

It’s certainly an intriguing concept and the bike itself looks both well engineered and super tough.

I suppose we can hope that Dave might get one when he next decides to change his socks – that seems to be how often he changes bikes! (thinking about it, I suppose you could take that either of two ways – put it this way, I’ve never noticed his socks smelling…).

Perhaps Mark the unidexter could sell one of his kidneys to finance a new bike instead?

More information, in both quantity and quality, is available as any sane person would imagine from the Cotic Hemlock web page.