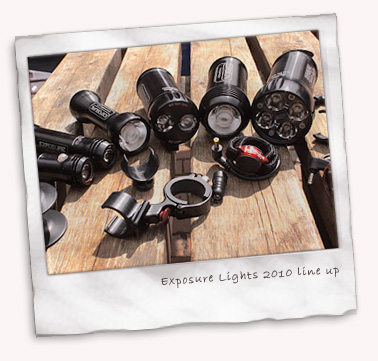 I’m a big fan of my Exposure MaXx-D which is now almost ten months old. It’s not caused me any problems, has worked reliably and ticks every box I can think of for convenience and ease of use. I can swap it quickly and easily between bikes and even use it as a torch if I need to.

But. It’s expensive and isn’t even the last word in power output these days with Lumicycle and others offering more powerful lights albeit with the added faff of cables. Mark even has a £50 Hong Kong special which puts out nearly 700 lumens very effectively.

So Exposure need to extend their range – there’s no point being the Rolls Royce of lights if you only sell Rolls Royce numbers (although it has to be noted a number of Moles run MaXx-Ds). With this in mind, clearly Exposure are seeking to cover as many bases as they can from what you can see in the picture above.

Gleaned from Bikemagic, who have long had a reputation for breaking Exposure news first, here’s three further developments to the range, on top of the recently announced White Eye.

First, the Tora and Diablo twins which both chuck out 700 lumens from 4 P7 emitters. The Tora comes with three lithium cells to give the usual 3 hours burntime on max output whereas the Diablo has just the one cell – so just one our on max. Obviously both lights can be throttled back to increase burntime. The Diablo has the added benefit of being able to fit into Exposure’s standard helmet mount.

I like the size and shape of both these lights but can’t imagine the one hour performance of the Diablo will give it much of an appeal – that’s such a short duration; we’re regularly out for 2 and a half hours on our night rides. Maybe a piggyback cell will help with that?

For the roadies, the Strada now provides similar capabilities to the current Race light but has road specific lenses to spread the light more efficiently for tarmac progress.

Finally, there’s the new Spark, a version of the Joystick which allows battery swapping – I’m not sure which cell size it uses but this seems a much more attractive and compact alternative to Hope’s One light.