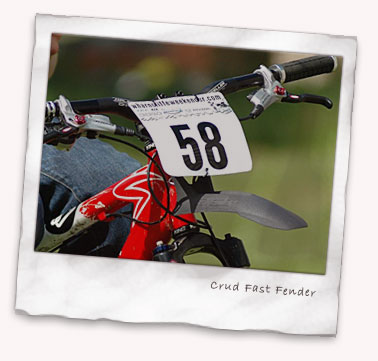 At some point everybody has tried a Crud guard. I can say that with some confidence since Crud has become a name synonymous with mud deflection in the way Marins have for MTBs amongst the Mondeo-driving middle management brigade.

Obviously there was a range of generalisations going on there with that last sentence (and no little amount of alliteration) but I was trying not to cite Hoover as an example of the whole brand-names-turned-generic-descriptions thing. I hope I haven’t offended anyone?

Er, moving on by going back. Back to Crud, where we seem to have come in. I’ve just seen these pictures on BikeRadar of the new Crud Fast Fender which has been undergoing testing with no less than Steve Peat. The idea of it is to stop the spray which gets thrown forward of the wheel at speed from landing back on your face and eyes.

Many riders I know have tried the RRP Neoguard which not not looks fairly discrete but can also be printed with your own logo should you wish. By contrast, the Crud fender looks, umm a bit extrovert. Too extrovert, too grrr! for me, I can’t see myself using one as they seem to look rather odd hanging off the handlebars in free space. Admittedly they also hold a riders race number assuming they’re in a competitive event, it’s just I think they look bloody stupid!

Maybe I’ll be proved wrong but I don’t think this is something the majority will want to use, even if the principle is quite sound. To my mind Crud should be concentrating on a quick release for their rear mudguards, as Cycraguard use. I’ve been running that system all winter and have found it perfect for quickly adding and removing the mudguard or for switching to a different bike (that last point is a bit moot since I’ve only had one bike all winter but you know what I mean!).

Let’s see how it goes but for me the jury isn’t out, it’s put on it’s coat, collected it’s expenses and disappeared into the sunset.