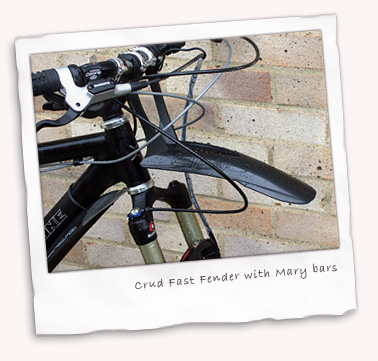 Mr Crud sent Matt a box of goodies a few months back now and we’ve been a bit slow in bringing you any info on them. This is mainly because part of one of the sets, a Fast Fender and a rear guard, have been sitting on my garage floor waiting for me to finish faffing around with bike builds.

But yesterday I fitted the Scandal with the Fast Fender, the rear guard and a standard Crud Catcher I’ve had floating around for ages. Now first up I have to say that for last winters rides I was a big fan of the SKS Blade front mud guard. I think this is by far the most effective setup IF you can bolt it into the bottom of the crown as you can on Pikes.

On normal forks you need to use the expanding plastic plug affair and I have had this “pop” out on a couple of the more lumpy descents we do. I won’t comment on the RRP Neogaurd type of thing as I’ve not used it and other Moles can comment.

The Fast Fender has come up for a lot of “comments” over it’s look, here and across the web. You are either going to hate it or love it and given it was designed for a downhill rig by Mr Steve Peat who am I to pass comment on that!! On my ScandAL it looks a bit weird as I have a high stem which takes it some way from the tyre. Having said that I notice that it’s not much further away from the tyre than the frame-mounted Crud Catcher so maybe it’s not such an issue. So maybe the look is a bit marmite.

Functionally it works though. My face and torso were free of mud and splatter and while I initially thought it would only last a ride or two on the bike I’m thinking it might make it through the Winter now. Time will tell. The fixing is a bit of an issue for me. The On-one Mary bars I use don’t have much “straight” bar and hence the area around the stem mount is a bit of a premium. The Fast Fender takes it all. As long as the lights have sufficient left/right movement this is OK otherwise it’s a bit of an issue. Maybe the new Titec Jones H Bars are the answer…

At the back the rear guard has a number of interesting changes from the older models I have. For a start it comes with 3 different sized shims which are clearly marked for the size of seat pin you are using. The adjustment system has also changed (this may have been like it for a while as my own Crud gear is quite old) but a single, easily accessible hex bolt allows you to adjust the angle of the guard and the tightness on the seat pin. Easy and effective.

All in all an effective set up. I like a bit of bling like everyone else but I’m not bike tart and function has been the main criteria I’ve always gone with. From that point of view the set up works well. I think the Fast Fender will almost certainly evolve as the original Crud Catcher has and this may win over more of the “fugly” brigade but for now I’ll stick with it.

I’ve added some pictures of the Fast Fender fitted to my ScandAL on Flickr. Remember I use curved Mary bars and on this bike and a high stem.

Filed under Accessories, Reviews in October 2009