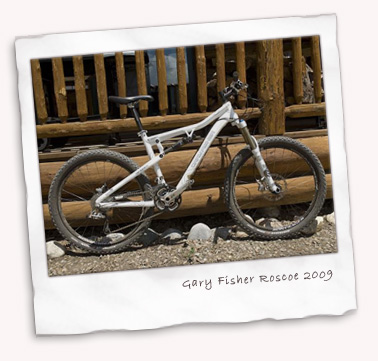 First off, a hat tip to Singletrack magazine who have just released news of the 2009 Roscoe MTB from Gary Fisher and who I’ve culled this pic from (there’s more detailed pictures over on Singletrack).

The thing about Gary Fisher bikes is their individuality, often taking quite extreme design decisions versus more mainstream manufacturers (e.g. getting Fox to produce forks with bike specific crown offsets).

Being part of MTB’s heritage and part of the Trek megalith though lets you get away with things like that. This time it appears (even if at first glance) that they might be onto a winner with the new 2009 Roscoe.

Despite hearing Dukes of Hazard style chortling whenever I hear the name Roscoe, I have to admit that the bike looks fantastic and with a spec that includes Treks’ ABP (Active Braking Pivot) technology, super stiff frame and Fox 15mm bolt through forks it has a lot going for it. Add in a custom Fox Dual Rate Control Valve rear shock (I told you they like different) which is designed to offer coil-like rear shock performance and I’d be very surprised if this isn’t a serious contender for all round bike of the year.

Maybe it’s a bit early to say that but if I were shopping for a 140mm trail bike this would certainly be on my shopping list.