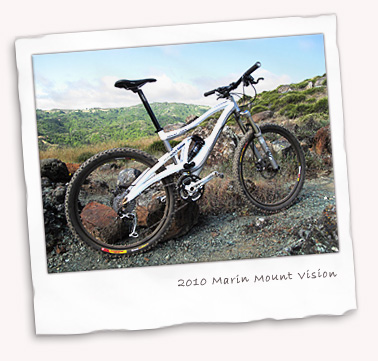 It’s that time of year again where some of the big boys start to release details of their 2010 bike ranges. Specialized have recently been trickling information out (which I’ll cover soon) and now it’s Marin’s turn to waft the scent of newness under our noses.

I’m not sure I’m too fussed really. Having owned a Marin for a long time (and still running one in freak bike guise) I feel a bit ho-hum about their line-up of recent years even though the press continue to praise them.

Maybe it’s that I don’t happen to know many people who actually lust after them? Maybe they just don’t inspire the kind of brand loyalty that Orange or On-one can manage? Regardless, they’re influential designs. I jive their neat replaceable rear bolt-through dropouts for instance.

For 2010 the Mount Vision loses around 200g from a lightened swingarm as well as acquiring a thorough change to it’s geometry – basically it’s getting a longer wheelbase, longer top tube but similar sized cockpit thanks to a steeper seat tube and stem. All designed to keep it nice and stable as well as keeping it climb-able.

The other major change to their full sus line-up is that the Wolf Ridge, in all it’s many guises, has been toe dropped, or at least it’s name has. It survives after a fashion in the form of the Attack Trail optimised around a Hammerschmidt transmission. That’s not the only transmission available but it sounds as though best results on this 150mm travel machine are likely to come from this set-up. 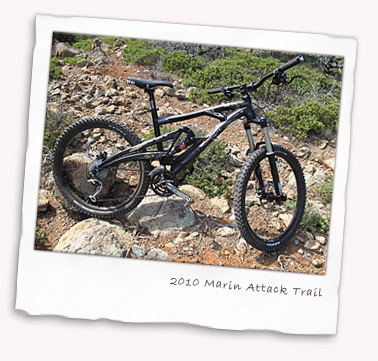 Recent Wolf Ridges have been well thought of so let’s hope the Attack Trail can carry on where it left off.

As for the delayed 120mm travel Alchemist I have nothing to add. Warning bells sound when you hear it has been delayed because of the need to pass CEN testing (presumably there was a problem with the original design?) and of course, it’s one of the ugliest bikes I’ve ever seen. I can’t even bring myself to show the photo!

Full 2010 Marin details are available on the Bike Magazine website from whence I’ve ‘repurposed’ these pictures (looks at feet). Go visit. They do this sort of thing better. Or at least, differently.