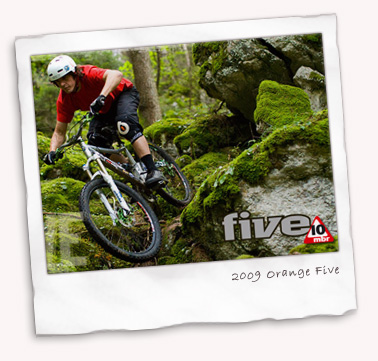 Just a note in passing to say that Orange Bikes have just launched their 2009 range of bikes. Disappointingly perhaps there’s no mention of an Orange belt drive singlespeed but what does feature is a lot more ruggedness.

Orange have taken full advantage of the bolt through products coming on stream with most of their bikes from the Five upwards using some form of bolt through arrangement. There’s also increased use of the Maxle system at the rear, featuring on the Five AM, the new Blood range and the Alpine 160. I’m tempted to think about upgrading my Five’s swingarm too if it’s backward compatible.

So some very capable bikes. It’s nice to see the Five SE is now closer to my custom specced version with the same tubeless wheelset and finishing kit that I’ve been running for eighteen months. The Orange version sticks with the Fox TALAS fork which now matches my Pikes for travel and also uses a bolt through set up. Probably, in fairness, a better match than my heavy Pikes but I still love them.

What is noticeable is that the three bike ranges mentioned above all offer 160mm travel which when you think about it is amazing. As my fellow Moles have comprehensively proved recently, one gear and one short travel or rigid bike is all you really need in our neck of the woods but I guess Orange know their market.

Anyone in the market though will need to be pretty clear on what they plan to use their bike for. The Blood range along with the Alpine 160 and Five AM offer a gravity-led focus with double chainrings showing where their interest lies. It makes me wonder if cigarette papers will be needed to split them.