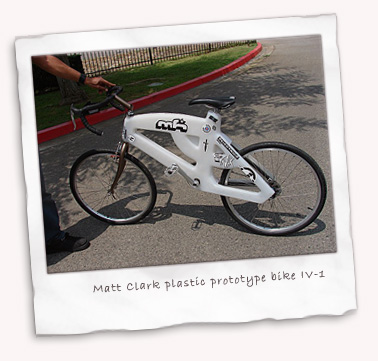 People have been trying to reduce the cost of bike production for years. Despite what many people think, it’s still the case that most bike frames are individually laid up and welded, even if the main assemblies are more mass produced.

But imagine if you can come up with a way that drastically lowers the cost of producing a viable bike and gives you the chance to make it out of something that’s going to get chucked in the landfill anyway?

So here we have a prototype of the ultimate recyclable bike which has been dreamt up by Matt Clark, an industrial designer based in the US. Being a prototype it’s not actually using recycled plastic itself (I don’t get that either), but the potential is clear for us to be running around on recycled drinks bottles at some point.

Advantages are light weight vs strength, durability, low cost and of course the recycling aspect – perfect I would think initially for an urban bike hire scheme á la Velib that would score a few eco brownie points.

Disadvantages are of course it looks cack. But surely that could be overcome and there’s plenty of space for stickers :o). So, I’m not going to dismiss the idea straight out as it’s tempting to do, maybe at some point we’ll see a new plastic singlespeed cult out on the trails?

One thing though. Why do the makers of these ropey prototypes all put such awful kit on their creations?!

Here’s a couple of links to more information: