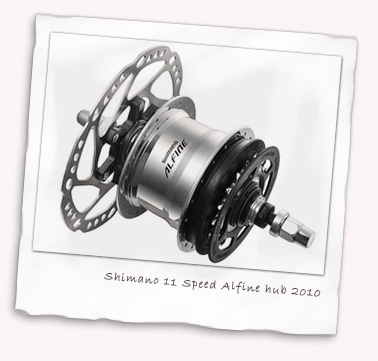 Shimano have announced they will be producing an updated Alfine geared hub for 2011, which means availability around September 2010 I understand. Perfect for the winter season then!

I first saw this on Twitter today from Brant at Shedfire and immediately thought of Tony. Not for any sentimental reason you understand, it’s just Tony is currently running a very reliable 8-speed version of the Alfine hub on his winter Inbred, or ‘the Bike Anchor‘ as he likes to call it!

The new 2011 Alfine comes appropriately enough with 11 internal gears in a hub which is actually lighter than the 8-speed at 1600g. That sounds a lot but a Rohloff is heavier and if you take into account the weight of conventional drivetrain it enables you to ditch, maybe it’s not so bad as you’d think.

So weight is down, and gear spacing has been closed, while the gear range has opened up to 409%; it’s also now lubricated with oil rather than grease which should make things even smoother shifting. According the information on Bike Europe, there’s also a new Alfine Rapidfire Plus shifter which ‘operate[s] in the same way as Shimano’s high-end MTB shifters’. All in all it could prove quite the niche to jump into.

Tony’s experience with the 8-speed has been pretty good, you’d think he was running a singlespeed with just the single cog at the back until he changes down and motors away from you (riding a proper singlespeed) on the climbs. Although that’s usually what Tony does on whatever bike he’s riding! He’s found a quick clean on occassion and a chain lube has been enough to keep the bike running fine all winter.

I wonder what one of these with a Hammerschmidt up front would be like?? Probably quite mad but very reliable…

More info at the Sydney Cyclist and Bike Europe. Oh and nod to Tony for the Spinal Tap reference!