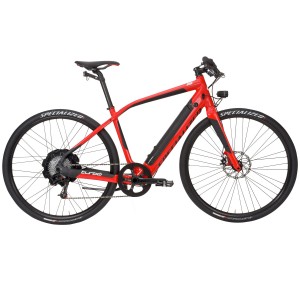 Back in 2010 there was all sorts of talk of battery powered, electrically assisted bikes coming to the market in a big way. Truth be told, the market was comparatively booming (starting from a low base admittedly). With a few exceptions though, the development seemed to revolve around utility over performance for most implementations.

However, Specialized have now entered the market with a super-fast commuter bike which looks like it will shake things up a bit.

In much the same way as Apple has managed of recent years, renowned for either creating whole new market segments, or just turning up and beating the competition hands down, Specialized have something of a reputation for moving the market on.

For 2012 they moved into 29ers in a big way with some cracking models, really helping to both legitimise and grow the 29er market, while in 2011 they showed the first fruits of their collaboration with F1’s McLaren, in the shape of the Venge road machine. So far, so conventional, taking established ideas and pushing them further.

But the Turbo e-bike is a different thing entirely. Rather than produce a staid, battery assisted bike for people with less than optimum fitness, they’ve created a bike which is designed to get the young, thrusting professional to work in the shortest space of time. It’s so fast it probably can’t be sold in the US.

Maximum speed is 28mph. I assume they means that’s the bike assisted by battery alone, since it comes with a 1×10 48T FSA chainring at the front turning an 11-36 rear cassette and shifted by X-0 running gear. That combination could reasonably be expected to top 28mph on it’s own, providing you have the legs of Chris Hoy or a precipitous incline ahead of you. With the motor in the unusual looking rear hub designed to boost rather than supplant your efforts this must feel like riding with a permanent 20mph tailwind! 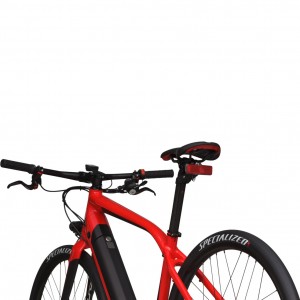 Taking the bike as a whole, I have to admit it’s a striking looking machine which ticks many of the boxes a semi-cycle-literate rider would look for. This included quite slack looking geometry (no data on this is currently published), a tapered headtube, bolt through front and rear hubs and that X-0 kit, internal gear routing, plus hydraulic Magura MT-6 disc brakes which are serious bits of kit. I quite fancy having a go on it myself.

The frame has a nice evolution of Specialized’s sweeping top tube with a pronounced kink near the seat tube that leaves a far straighter run down to the rear dropouts via the seat-stays. It looks chunky and strong and frankly carries suggestions of how a hardtail Orange Five might look if Orange were so minded to use their folded aluminium front end for that purpose.

Being a mountain biker it’s almost inevitable that I find myself looking at this bike and wondering about it’s off-road capability. You’d need to get some ‘cross rubber onto those rims I guess, or swap out the fork for a proper 29er suspension job but I reckon it might be an interesting exercise. I can’t see it wanting to handle technical trail riding but for a fast canter across country it could be a great laugh. Anything that gets me up the Tanners climb would suit me to be honest!

I reality I think it probably weighs a fair bit so take my comments as tongue in cheek but it would be interesting to try it don’t you think? See for yourself on the Specialized Turbo website.