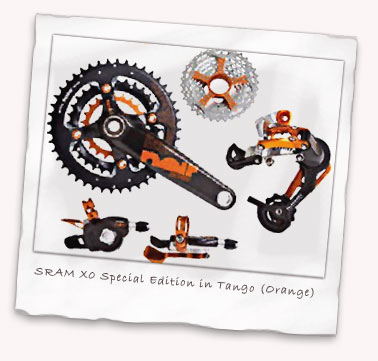 OK, forget KCNC jockey wheels, that’s just so last year. I’ve found news (from Singletrack via MTB news) that SRAM are bringing out a special edition coloured X0 groupset in five anodised flavours which makes me very glad I haven’t yet got round to replacing my shattered X0 rear mech.

Available in Cash (green), Pinkslip (Pink), Redwin (Red), Tango (Orange) and Gold these look like the last word in pimpness and might even give anodising a good name, even if the pictures so far appear to be pretty grainy.

My personal favourite has to be the orange which will be perfect for my Five – not just due to the play on words (it’s an Orange see…) but because the orange would make a decent contrast with the electric blue paintwork.

Initially I’ll be aiming to just replace the rear mech but the range includes the X0 cassette, trigger shifters and Truvativ Noir crankset complete with an anodised inner ring. Now that’s how to make a statement on the trails even if I’m only likely to get the orange spidered cassette at most when my current cassette needs replacing.

I’m quite taken by the pink though. I still hanker for a white frame with pink kit and this moves it a step nearer to making it possible provided I had a big fat wedge of money. Running a complete pink X0 groupset with pink brakes and levers and a Fat Cyclist outfit would be a properly iconic look don’t you think!!?

I just hope this is for real and not a stupidly early April Fool. DaveP is going to have to start saving hard…