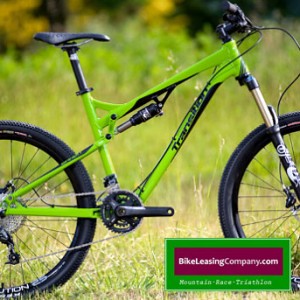 Anybody who has bought themselves a new bike recently – be it road or mountain bike flavoured – will have noticed that it’s very easy to spend well into the thousands on getting that dream spec we all want so badly.

Paying for it – as always – is the problem. Up until now it’s been a case of either saving the cash or financing it with a loan or credit card; which you do depends on your personal circumstance and attitude to debt but ultimately you need to finance the full value of the bike. Now there is an alternative way to your dream bike which has been generating a growing level of interest recently, and that’s bike leasing.

I’m not going to rehearse the arguments for and against since I’m no financial advisor. Broadly speaking, the idea behind bike leasing is you pay a percentage of the bike’s retail value up front and spread the rest of the cost (which is calculated minus the second-hand value of the bike) over a two year agreement.

After two years you’ve spent a lot less than if you’d paid for the bike up front, spread over relatively small monthly payments, and you can then decide if you want to return the bike or keep it by paying the final balance. In a way, it gives you two years to decide what you want to do, and two years to ride it while you’re deliberating.

Over the past week I’ve been in touch with Paul Mander-O’Beirne who runs the Bike Leasing Company. Paul is a local Surrey Hills rider and his company offer road and mountain bikes from some well-respected brands for lease. Road bike brands include Merida, Kinesis and De Rosa (among others) and Mountain bikes are available from Transition, Intense, Ellsworth and more. The number of brands is growing all the time.

It’s certainly an interesting option if you either can’t afford the initial frontline cost of the bike or would rather hang on to your cash for as long as possible. So long as you realise that a £2500 bike will always cost you £2500 or so one way or another it seems an option well worth exploring.

What I found particularly interesting from talking to Paul is they also offer leasing on bike frames and other components like forks or race wheelsets. This suggests that a top end £1000 fork might cost you £16-something a month by my rough reckoning. Similarly, The Bike Leasing Company will upgrade parts on your bike at trade prices if you’re not happy with the standard specs, which means you should always get what you want.