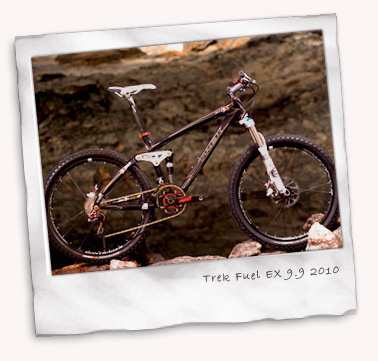 Now it’s Trek’s turn to take it’s place in the 2010 spotlight with news of the 2010 Remedy and EX mountain bikes. Tony’s review of his 2009 Trek EX 8 has been consistently the most popular article on our site for a few months now so here’s hoping we can get our hands on a 2010 model at some point! Based on what I’ve seen on Tony’s bike it should be worth having.

The EX 8 in my opinion was one of the bargains of 2009 before exchange rates and credit crunches took their toll. For around £1800 Tony got himself a very handy machine which he’s been putting to good use since. Apart from the abilities of the bike itself it was well spec’d and looks the business in monochrome – far better than than 2010 Specialized Enduro I mentioned the other day.

You can see in the pic above that the attention to detail on the EX range continues for 2010 and not just in the careful use of graphics and anodising. Most importantly the top end EX models gain the ‘bottomless’ Fox DCRV shock exclusive to Trek and their sister brand Gary Fisher. It seems to perform superbly on the Roscoe, so Trek have lost no time applying it to their own bikes, including the EX 8.

Add an oversized bottom bracket into the mix and a tapered headtube and you’ve got very nearly a future proof (for the foreseeable future at least) bike that is already impressively competent. The more I see of the big brand bikes the more I wonder where Marin fits into the mix to be honest.

Trek also have the Remedy for the freeride/all mountain crowd, now in carbon with 150mm of travel. As well as a special carbon weave (rich man’s toupee?) in the downtube there’s also an external ‘bash guard’ on the lower half to protect against rock strikes. 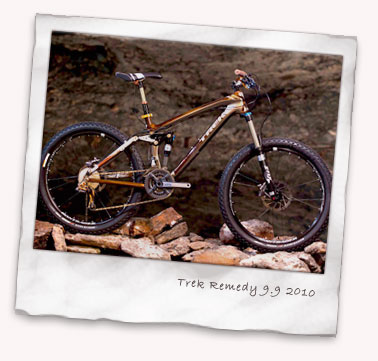 As well as a 95mm wide bottom bracket the front mech area comes with a direct mount front dérailleur and ally versions get ISCG mounts for chain guides or, of course a Hammerschmidt transmission. It’s interesting that the cost of this remains high enough for few manufacturers to be fitting it as standard but at least they make provision for it!

As with the EX range, the DRCV Fox shock is present and correct. Should be a popular bike in my view in rockier lands, even if once again Surrey singletrack is wasted on it. Remember, a properly sorted singlespeed keeps that at bay all day long…

Links, as always to people who have actually seen these bikes in the flesh; this time at Bikemag, Bikeradar and Singletrack.