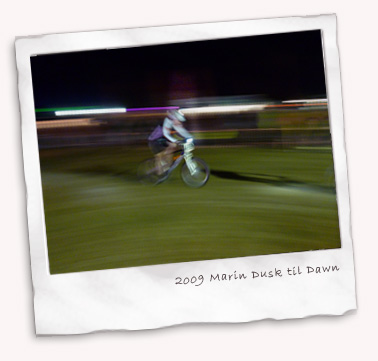 This weekend as you know was the D2D at Thetford, our first team race although a handful of us have raced bikes in the past. I’m not one of them.

Despite all that I think we put up a creditable performance in no small part thanks to everyone’s impressive efforts. Team Muddy Moles One (myself, Barrie, Colin and Jem) came in 29th in the men’s four-man category of 70 teams while Team Muddy Moles 2 (Mark, Lee, Tony and Dave) placed 62nd.

Jez was in a class of his own and ended up 65th of around 130 solo male riders, managing 8 laps which equates to around 85 miles of the taxing Thetford course. Serious respect to Jez our walking zombie, and respect to Mark too for doing much more than he expected with limited training.

There’s loads more but we’ll follow all this up over the next few days. For now, thanks to all for a great weekend and some great laughs (photos of Thetford D2D 2009 are on Flickr).

Courtesy of Timelaps who provided the race time management.

Filed under Rides in October 2009