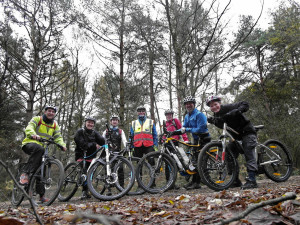 Albert and I arrived at the Village Hall in Holmbury just before 10am. Ray was already waiting for us with his son Tim. Then Ginny, Jo, Nik, Karl and Jessica (from Love to Ride and Single Track School) arrived. The ‘moles’ pitched up, stopped for a couple of minutes than disappeared into the distance never to be seen again. Thanks for your ‘support’ guys. And then Jim and his two sons arrived with 5 electric bikes. These included:

Nik came with Jo so she could have a quick try and see how the e-bikes feel… Well Nik got on and we all watched as she went off down the road, then she turned around and she simply sat back with one hand on the handlebars and giggled her way up the hill like a pro! And that was that, hooked! So we headed up the hill, with Nik, to Yoghurt Pots. On the way up we came across Karl, freewheeling down the hill with a broken rear derailleur. So he joined us at Yoghurt Pots to try the different e-bikes.

At the top of Yoghurt Pots I finally got a turn and climbed onto the Haibike Xduro RC29. I found it a bit stiff at the front but I got down safe and sound anyway. Then for the up! I selected the highest assistance setting (Turbo) to see what it can do and WOW! I pushed my foot down and the bike surged forwards!!! It felt like I was an arrow just shot out of a bow. I zoomed up the hill. One hand on the handlebars and giggling… 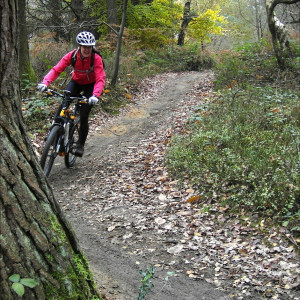 I passed a group of walkers and then sat up and zoomed off. They stopped me at the top of the hill where I was getting onto another e-bike to ask me if I had an engine as they could not believe how quick I was. Well they were quite taken back when I told them it was in fact an e-bike. So off down Yoghurt’s I went again on the full sus 26″. I liked that a lot. I found it felt lighter and easier to handle round the singletrack.

After we all had a few tries on the different e-bikes and Karl had done his impromptu photo shoot we went off down Telegraph Row, section 2. I started that on the Ave and then swopped onto the Scott. The Scott is quite awesome and it’s easy to flow with it.

We turned off Telegraph and headed back up a small hill toward the village hall, Albert and I spied two guys on mtb’s, and the bug bit. So hand in hand we pedalled up the hill, with no effort, and flew past the two who could not believe their eyes. When we got to the top we stopped to wait for the others and saw Ginny on the full sus e-bike passing them so quickly that the guys went white.

When they eventually got to the top the one guy asked us if we had motors as he couldn’t believe how fast we were. We had to admit to him that we were on e-bikes… so the other guy calls back “That makes me feel so much better!” you should have seen their faces!

I think everyone had a different favourite e-bike and I have asked everyone to write up their thoughts so we can add them to this to make it a well-rounded review. In my opinion, I liked the full sus and the Scott the most for flowing singletrack. All of them are awesome up hills. I can understand how they will enable riders that would rather stay home for fear of not being able to do the distance or hold the group back get out and ride more and more often.

All I can say is if you are keen to try them, make contact with Ray Wookey at cyclingmadeeasy.co.uk and go try one for yourself. He is lovely and always keen to show people how they work. You’ll be amazed!!! 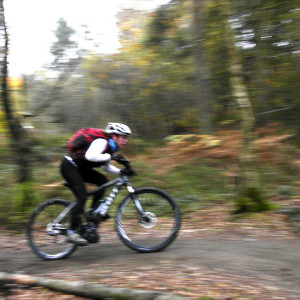 I am so chuffed that I got to try out an electric bike this morning… I love the fact that it can make cycling and mountain biking more accessible to more people… and mean that ‘personally powered’ peeps may be able to ride out more often. The feeling of being supported when riding uphill has to be experienced to be believed… it’s impossible to do it without a smile on your face… so much fun – highly recommended to anyone who loves enjoying the countryside on two wheels… now there will never be an excuse not to get out and ride – keep your old faithful and invest in one of these for the lazier days!

One word: FABULOUS! After trying several of the electric bikes this morning, I’m seriously thinking of getting one, probably the full sus. I have a med condition, lupus, which means I have to keep my pulse lowish or risk getting rather seriously ill. As a result, having been fit all of my life, in the last 5 years or so I’ve become pretty UNfit, felt trapped in/by my body, haven’t been able to go mountain biking with my partner before – and hated not being able to join in.

Suffice to say, after 5 or 10 minutes’ riding uphill today, I was barely out of breath and the dreaded pulse was OK! Once the implications sank in, I had a bit of a ‘moment’; yes, tears – of relief and hope. And freedom! The even better news is that, as I discovered, you can control just how much help the bike gives you – so I’ll be able to get fit gradually. Oops, see what I did there? WILL, not would…! 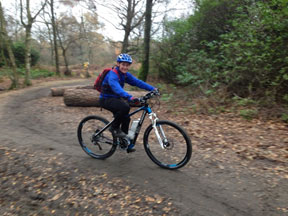 Trying out the electric Haibike 29r was an interesting experience. When I lifted the bike up it did seem a little heavy, but bearing in mind the motor and battery, this was hardly surprising. Going up hills on the trails was an absolute doddle. Very little effort was required, and my usual puffing and panting was absent. On descending Yogurt Pots I found the bike to be heavy on the steering and not very flexible. Whether this is just a case of getting used to the bike, or the weight of the bike I am uncertain. Certainly on the main trails it was fine, but on the technical I found it to be a little unwieldy.

The full sus Haibike was great fun. This was a smaller frame and a 26r. This bike seriously motored. I had a bit of fun over taking a couple of lads on their mountain bikes and motoring up the hill. They were a bit dismayed until we pointed out that there was help from a battery. This bike was far more flexible and seemed to whip through the trails and plough over the terrain more easily. It was no effort to ride.

Both these bikes had a lot to offer. I can see me as a geriatric thoroughly enjoying one of these. Anyone who is unfit or struggling to keep up with other riders will benefit from one of these. It’s great for boosting confidence for beginners or those wishing to get fitter. 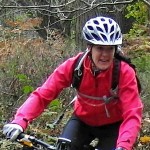 Yvette is a very positive person to have around and turns out to be quietly competent both up and downhill. Well, she has to be quiet at something!