The promise of a glorious morning lured many a recalcitrant mole from his burrow yesterday, with what could be the largest number of riders this year gathering at Bocketts for the 0830, sorry, 0855 start. 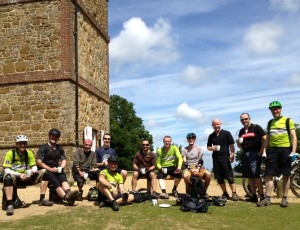 An incorrectly fitted o-ring seal on the rear hub bearing saw Matt instigating the lengthy pre-ride faffage.  We were all happy to bask in the sunshine and exchange banter, while DaveC got on with the serious task of remedying the situation.   Jez, then JamesS arrived to swell the numbers to 13 riders, grateful for the delayed departure.  Joining the late arrivals from Dorking were Dave-Dub, Andrew-Akak (both having ridden over from afar), new rider Nick (aka Jonesy), Kev, Tony, Karl, Lloyd, Gordo and the aforementioned Matt & DaveC, and myself. 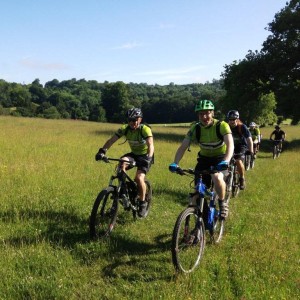 Having applied liberal quantities of sunscreen, we headed over to Leith Hill via Ranmore and ‘Coldharbour Lane way’.  Skirting ‘Wiggly Wood’ (night rides only), we headed down to Chapel Lane and up to Ranmore using the bridlepath that runs to the west of ‘Dearly Beloved’.  This had the advantage of an easier slope at the start, but as it steepened towards Ranmore Church there was much muttering about my choice of route.  Some residual mud from Friday’s downpour also caused a few problems (especially for me).  However, for the first time this year I was aware of the cooling shade provided by the tree cover, shame we’ve had to wait until the end of June for a decently hot day. 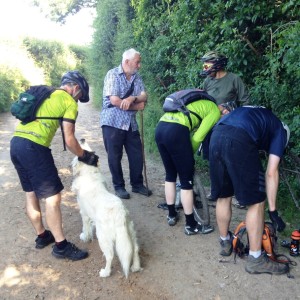 The group split slightly for the descent down to the railway line, with the gnarr-shredders opting for Grievous Angel, and the rest the Macpherson’s Descent.  We had our first puncture of the day near the Unum buildings at Milton Court, when Akak’s rear tyre sprung a leak.  We ignored the helpful suggestion of the elderly gent to stuff the tyre with handfuls of grass, and opted for the replacement inner tube instead.

Using some road sections to get the climbing done, our first attempt at a serious trail (Pedal Death) ended when we ran into the effects of some recent logging activity.  We quickly diverted to Karl’s favourite, Foot & Mouth.  This proved a rude awakening for some, with much carnage back up the trail behind me.  I’m sure some follow-up comments can clarify the detail, but this pic of Dave illustrates the ‘comedy of errors’ that took place. 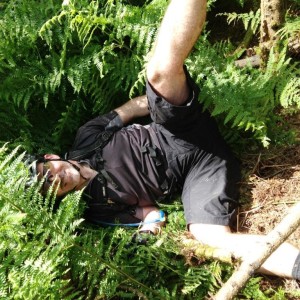 At this point, the DOAMB Boys, who were having a final warm-up before heading to the Alps next week-end, caught up with us.  Have fun, guys, gutted I can’t be with you as we had a great time last year in Les Arcs.  ‘Slaag’ was negotiated a little more successfully, I believe, and after that we headed off to the play area and Slidewinder, with Jez departing (unnoticed by me) to head back home to Dorking.  Our route to the tower was via Wolvens Lane,  then the Bomb Holes and Bow to the Wow (for some).  After the punishing climb we all enjoyed some excellent cake and coffee at the tower, before heading back home via Personal Hygiene, Chicken Wings and Deliverance. 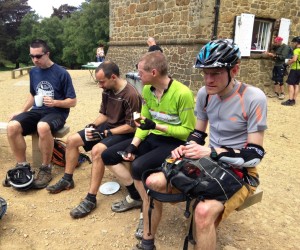 Akak suffered puncture number two on Summer Lightning, where James helped him out before he too headed back home to Dorking.  Back together again, we quickly despatched Wolvens Lane to Westcott, though I was interrupted with the news that my daughter had injured her knee and was on her way to Northampton General Hospital.  Further strengthening the belief that The Family Dandy are single-handedly keeping vast numbers of NHS A&E staff in employment.

We took the High Med route back up to Ranmore, with the heat and the distance covered causing a ‘stringing out’ of the group on the climb.  I had an excellent view of this from my position at the back.  On the final road section of the hill up from Dorking, Tony set off like one of his Border Terriers after a London Dynamo rider who had the misfortune to pass us just as we exited the trail onto the road.  With great restraint, Tony avoided pulling past although the roadie was out of the saddle and pushing a decent gear as he tried to pull away. 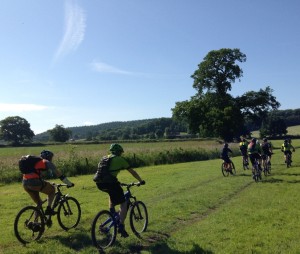 Those under time pressure headed off to take the Yew Trees descent back home, whilst those with a little more time to spare headed off for Golden Nugget and Polesden Lacey.  On GN, Dave had yet another nap in the undergrowth, as the camber  proved to be just a little too ‘off’ for his tastes.