For those that saw me polish off Guaca Mole’s jugs of Pimms on Saturday evening, it will come as no surprise that I started this Chilterns epic where I finished off the night before.  In my defence, it was a surprise when Steven offered Tony and myself a pre-ride ‘sharpener’; but when have I ever refused a free drink? 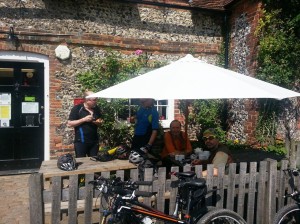 Tony (aka Mr Tumble / mybikeispants.com) and myself joined Steven and his mates for a scenic tour of the Chilterns.  Having started with a Pimms, our destination was the Rebellion Brewery in Marlow which was hosting a charity open day (and has the benefit of being less than a mile from Steven’s house).  Joining the three of us were Steven’s neighbour Vince, and cycling buddies Phil, Steve, Galliver and Andy.

The four of us set off reasonably promptly, as we were due to be meeting the other four a couple of miles along the route.  I’m reliably informed our route was to be; Marlow->Frieth->Skirmett->Turville ->Kimble Farm->Fawley-> Hambleden ->Marlow Common -> Rebellion Brewery.  I’m sure conditions in the Chilterns were no different to those in the Surrey Hills; hot and sunny, but not too dusty thanks to rain earlier in the week.

Our route took us along bridlepaths, mainly; with a few short road sections and some cheeky singletrack thrown in.  Tony started badly, with a pinch flat early in the ride.  Getting his Conti Vert Pros off ‘old school’ v-brake rims was a real struggle.  After a stoppage time that would’ve sent Bazza into apoplexy, we resumed the ride and fortunately Tony’s new tube survived the remainder of the morning.

The scenery was excellent, and the terrain exactly matched Tony’s description from the night before as ‘being like the South Downs with trees’.  Steven’s mate, Steve, left us just after Turville, the location for the tv comedy series, Vicar of Dibley.  We eventually stopped for tea and cake in Hambleden (see main photo).  This was another ‘picture postcard’ village, again much used as a film and tv location.

As we were munching our way through the cakes (cherry and almond slice, delicious; thanks Andy), Galliver’s tyre suddenly deflated with a loud hiss.  Time for another cuppa, then.  The ad in the shop window caused some amusement (see pic below); good job no-one noticed my Moles buff on my head. 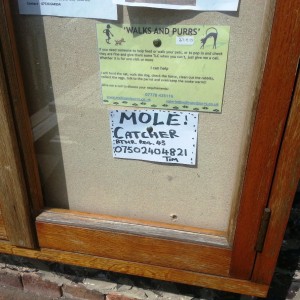 Resuming the ride, we had some fun on the singletrack on Marlow Common, before retracing our route back to the start and the brewery.  At the start of the ride, I’d decided to dispense with my usual forearm/elbow guards due to the heat.  Naturally, at some point I had to fall off and take the skin off an elbow.  But why did I leave it until that last 10 metres of trail just as we rejoined the road heading to the brewery?  My handlebars caught a branch just as I entered the final downslope off the trail (that will teach me to run 740mm bars), and as the front wheel turned sideways I was sent over the top and into the nettles, doh 🙁

Total distance completed was 39km, with 628m of climbing.  Rebellion Brewery’s finest ale and some good bbq grub was an excellent way to finish the ride.  Thanks to Steven (and mates) for a great day out on some great trails.