I did volunteer to pick him up from Byfleet, but Andrew insisted on riding the 8 or so miles to Dandy Towers as a warm-up for our trip to the Queen Elizabeth Country Park (QECP) Enduro.  Was that 8 miles too far, that he’d later regret?  Of course it was, but read on to find out why. 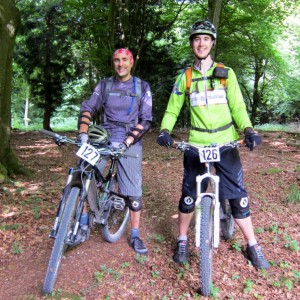 We arrived around 9.30am, and after a parking up and signing on, we were off for some practice runs with minimum faffage.  It was a gentle 20 minutes spin to the trail head, with all 4 trails starting at the same point.  Uncertain as to whether we’d have time for a second practice run, we headed off down Trail 4 as we were advised it was the trickiest trail.  It certainly kept us concentrating, with plenty of off-camber roots and loose surfaces.  It also required a lot of pedalling, dropping about 90m over 2km.  The final steep and loose drop down to the finish seemed particularly testing.  True to say that Andrew and I were feeling that we might not be in for an enjoyable day.

Fortunately, with the reasonably quick transition back to the trail-head, we had time for a second practice run down Trail 1.  This was, apparently, the original singletrack trail, and much more to my liking with plenty of fallen trees and built-up features to pop off for a little air.  I stopped to have a second look at a gap jump, but decided that after Friday night’s mishap, I’d better focus on getting to the start line proper with both the bike and myself in one piece.  Andrew almost ‘did a Dandy’ at this point, clipping his pedal on a stump and falling chest first onto the camera strapped across his sternum.  After taking a few minutes to regain his breath and his composure, we completed the stage and returned to the start area. 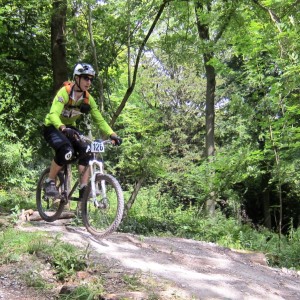 Here Andrew took advantage of the event sponsors, which included DC Cycles of Southampton.  With a few gear change issues following his ‘off’, probably due to an overstretched cable according to DC’s mechanic.  The mechanic was particularly scathing about the fitment of the original cable outer, which was too short; Andrew sheepishly ‘fessed up.  Though as Andrew pointed out, it’s been like that for over a year and has survived many previous spills.

The first riders set off at 1130, with Andrew and I due off around 1230.  My Trail 1 start time was 1258, with Andrew setting off 30 seconds before me.  This trail was even more fun the second time, as by now both my legs and my head were a little more ‘dialled in’.  As ‘Fun’ category riders, we were allowed 50 minutes between the start of each timed section, generally giving us over 40 minutes to complete the transition.  As this was a gentle spin of only 25 minutes in my lowest gear, we had 15-20 minutes between arriving at the start of the next trail and our start time.

Trail 2 was also great fun.  From memory, there were no major technical features, just fast-flowing singletrack.  There were also a couple of uphill sections that rewarded the fitter riders (boo, hiss).  Fed up with a diet of Soreen and Almond Fingers, Andrew stopped for a bacon and egg roll during the transition following the stage.  As a finely-honed athlete, I eschewed such junk food as I firmly believe your body is what you feed it.  So judging by this evening’s consumption as I sit here at the laptop, I’m apparently composed of Stella Artois and a bottle of South African Sauvignon Blanc. 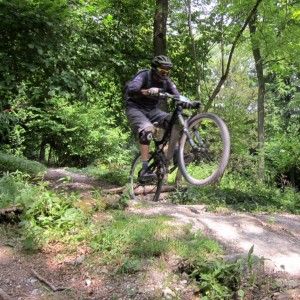 Trail 3 saw the start of Andrew’s troubles.  This was a similar trail to the previous one, with some steep ‘downs’ and a steep ‘up’.  I passed Andrew who was on his feet and attending to his bike, so obviously not injured, therefore carried on to the end of the stage to await his arrival.  He came in a few minutes later, and it turned out his crank arm had fallen off.  Too much mileage today perhaps?  I knew he should have allowed me to pick him up instead of being the hero and cycling over!  We stopped on the transition climb to complete the repair, but it seems that incorrect spacers had been fitted.  That darn bike builder again.

Trail 4 was far more enjoyable the second time around.  I think we were simply not warmed up when we tackled it the first time, but by now I was really enjoying the day.  I even enjoyed the final drop to the finish, with a reasonably sized crowd (well, about a dozen spectators anyway) baying for blood and spills.  I got away with a couple of dabs and remained upright.  Andrew’s verdict was less glowing, mainly due to his crank arm falling off again half-way down the trail.  He ran and slithered down into the finish, but at least he crossed the line.

We hung around for the prize giving, but sadly neither of us made the podium or got lucky in the random draw for prizes at the end.  I was pleased to find I was 18/48 starters in the ‘Fun’ category (http://www.adrive.com/public/5Aw2kn/final%20results.pdf), though had I entered the ‘Sport’ category I would’ve been a less than impressive 56/66 starters.  Congratulations to Matt Rivett from the Dorking Cocks who won the Fun category.  Unfortunately, Andrew’s times were badly affected by losing his crank arm on two of the four timed stages 🙁

From my perspective it was a great day out, and a great warm-up for the Dyfi Enduro I shall be competing in on 17-18 August.  Thanks to the QECP Trail Build Collective for a fantastic and very well-organised event; I hope to be back next year.