Whilst Dave C and Keith were on their covert operation to do an extended Mole Valley loop, the miserable looking weather had depleted the turnout for the regular Sunday ride. In fact just after 0830 as I turned onto the Admirals Track on my way to the Bocketts Car Park, I encountered Ray K.

OK, maybe it was more like 10 mins after 0830. After the big turnout in previous weeks I just couldn’t believe it when Ray said he was the only one at the Car Park. So knowing that we often have late arrivals on a Sunday, and I am not usually the last, we headed over to see if anybody else had arrived. But Ray was right – even as the clock crept towards 0850 there were no other Moles, so we decided it was time to set off.

Ray had in mind a ride to Newlands, but as I didn’t fancy Abba Zabba, Blind Terror and Numbskull without the more technically competent Moles along, we decided that Leith Hill made a good destination, being a decent distance and hopefully benefiting from the trails starting to dry up as a consequence of me fitting my MudX’s last week:
http://www.muddymoles.org.uk/forum/viewtopic.php?f=5&t=420

Although it was grey and miserable the weather wasn’t too bad as we made our way through Wiggly Woods, past Tanners Hatch and up the inappropriately named (for Ray at least) Impossible Hill. Instead of LandRover we took Cyclists Dismount down to the railway – and then into Westcott. There is then a lovely sandy route with a series of fun drops that I don’t think the Moles have ridden, before we followed the standard trek up Wolvens Lane.

With recent Apocalypse Now style tree felling the last sections of the route were difficult to recognise and it was more by luck than anything else that we found the bombholes. Then a quick look at Deliverance – errrr no, perhaps not today I think – and on to Leith Hill where tea for two awaited. Ray generously paid (thanks Ray) – probably grateful that I had showed up at Bocketts!

The Hill was just in the cloud so unfortunately visibility was non existent and the whole area felt cold, wet and grim, so we were soon off down another route the Moles rarely sample – Whiteberry Road the gentle fast bumpy downhill north from the bottom of the Leith Hill climb. It’s a perfect fast descent for the Orange Five, but the price to pay is a brutal climb up through Simons Copse to Wolvens Lane. 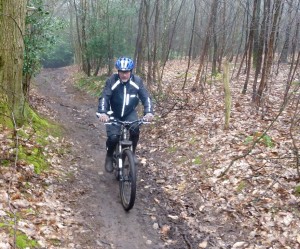 Once across the A25 it was up the Ranmore escarpment and home by a wife-friendly 1200 despite 20 miles on the clock. For Ray however there was the small matter of another few miles to ride back to Thames Ditton. Ah, these roadies can’t keep off the black stuff!