D’Andy may like to “Go Granny”, but The Mother was the target for the select group that struggled out on Sunday. 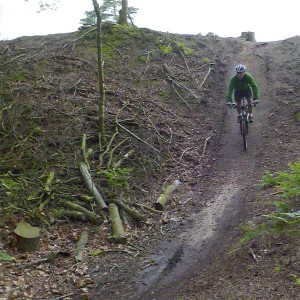 I think something like this has been done before, and no doubt better, but here’s an alternative ride report:

Ray, Tom and Lloyd – test riding a Santa Cruz Tallboy – Wiggly Wood, Dearly Beloved, McPherson’s, The Rookery, Wolvens Lane – Tom on a time limit heads home – On to the bombholes by Deliverance, photos of the Cricket Ground roll in, Leith Hill for tea and cake. Stumbling on Big Al’s trails, Starvarl Corner and shelter from a downpour. High Ashes farm and flat tyre for Lloyd.

The Mother, The Volunteer – careful Lloyd ! – Abinger Roughs, Whitedown, Hogden Lane – mind the flints – up the rooty climb which needs to be named, Lloyd heads home down Chalkpit Lane, Ray and John split at Dorking Road.

All up 23 miles, at a good pace – every climb felt like Ray was just about to pass me. And I think Lloyd is close to taking the plunge on a 29er.