With apologies to Bob of course, but Sunday’s ride was revelatory. The root cause was sunshine, sand and good company, but Karl had a thing or two to add.

This past week has been wet. Very, very wet and the sort of cold that seeps into your bones. I missed a couple of days commuting last week because the conditions just did not entice me outside on a miserable third week in January, but I did finally manage to squeeze in a commute at the end of the week.

By Friday, things were changing; the air was drier but cooler, so I went for the gravel bike on the basis that the trails were bound to be swampy. On the way home I rode up through Denbies and then followed the Ranmore Road all the way to Crocknorth and Green Dene before heading down Orestan Lane toward Effingham.

That produced a few moments of considerable unease as the Topstone threatened to shake me off while skating over rough, muddy ground. I probably need more tread and more volume than my 38c Pathfinders can muster at this point in the year.

By the time I got home, I had decided that an off-road ride over Ranmore at the weekend was not on my radar! 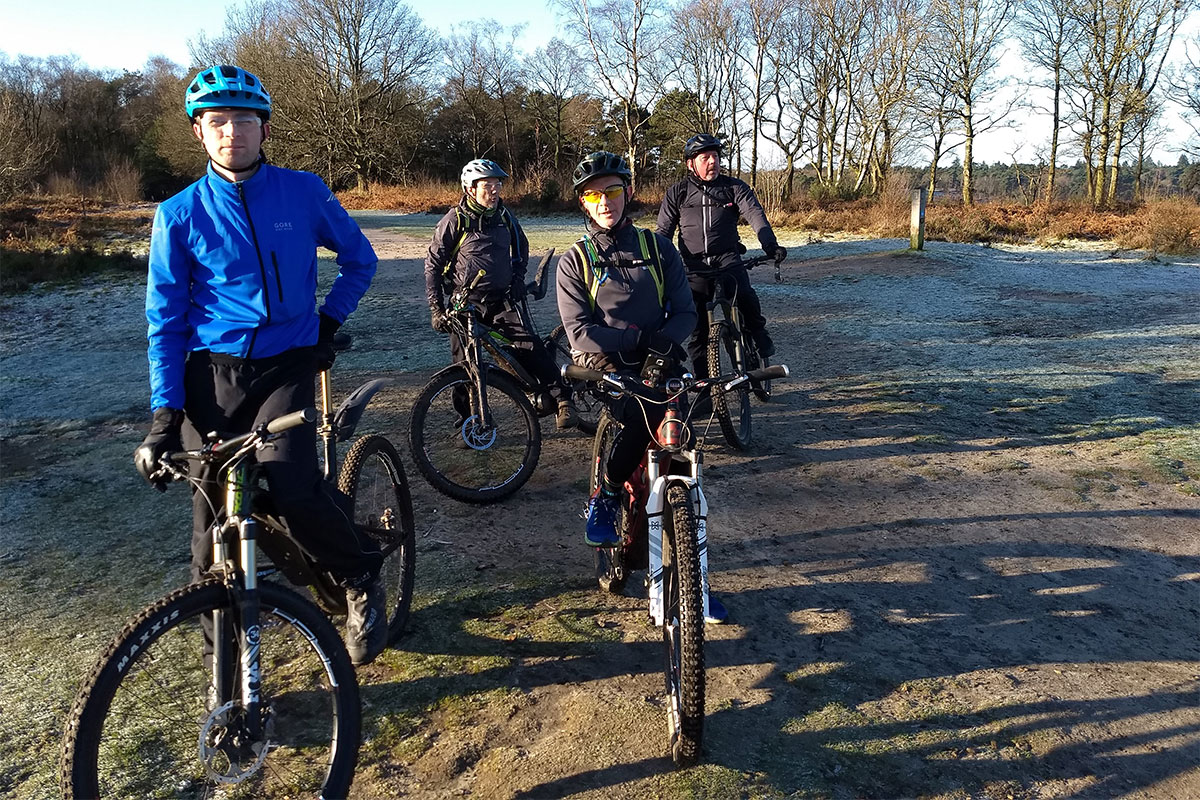 Fortunately, the Mole collective had come to a similar conclusion and plans quickly evolved for another visit to Hindhead and Frensham. When the trails are at their worst around Dorking, south-west Surrey gets to play its trump card. Miles of dry, sandy heathland and views to die for.

The cherry on the cake was a weekend free from rain, with wall to wall sunshine and cerulean skies overhead.

I last rode in this neck of the woods in late October. Since then, autumn’s copper hues have given way to winter starkness but on a day like Sunday it showed the landscape to its’ best. Lost of views through stands of bare trees to rolling hills beyond, and a low sun casting long shadows as we meandered along.

It wasn’t about the gnarr. It was about lots of steady riding free from mud, a few lung-busting climbs and a mutual appreciation of the moment.

Our route was largely a repeat of October’s too, with a few changes and detours. And Karl’s dream. There was always Karl’s dream.

Now, for decency’s sake there is little I can tell you of this flight of Karl’s fancy. Save that it featured Jem, a blue-eyed brunette and two bulk containers. Jem himself was – I would guess – both a little disturbed and a little disappointed that the whole thing was just a dream! But it’s the thought that counts I suppose…

It certainly kept us thinking for the rest of the ride!

We rode south to Hindhead for an early coffee; I’m in two minds about coffee at the start of a ride but I think that’s just habit. In reality it was all jolly civilised and the National Trust tea rooms at Hindhead do serve very nice coffee.

This whole area has transformed in recent years as the old A3 scar heals and it is busy with people and families out enjoying the environment – especially on a crisp, clear sunny morning!

After topping up on caffeine we set off in a northerly direction as we lost height from the peak of Gibbet Hill. It’s a lumpy, bumpy bridleway down to the Thursley Road. I’ve recently fitted a new, longer Mudhugger rear guard but could hear I need to add or tighten a few zip ties. It was moving just enough to rattle so I’m glad I used their protective tape. It didn’t go anywhere, but noise is movement, which means a risk of damage from the friction. I’ll have to investigate further.

Elliot managed to flat which is an unusual occurrence these days; more so to see Elliot’s minimalistic ride pack DOES actually have everything needed to keep on rolling! A worm was eventually deployed and we were back on track. 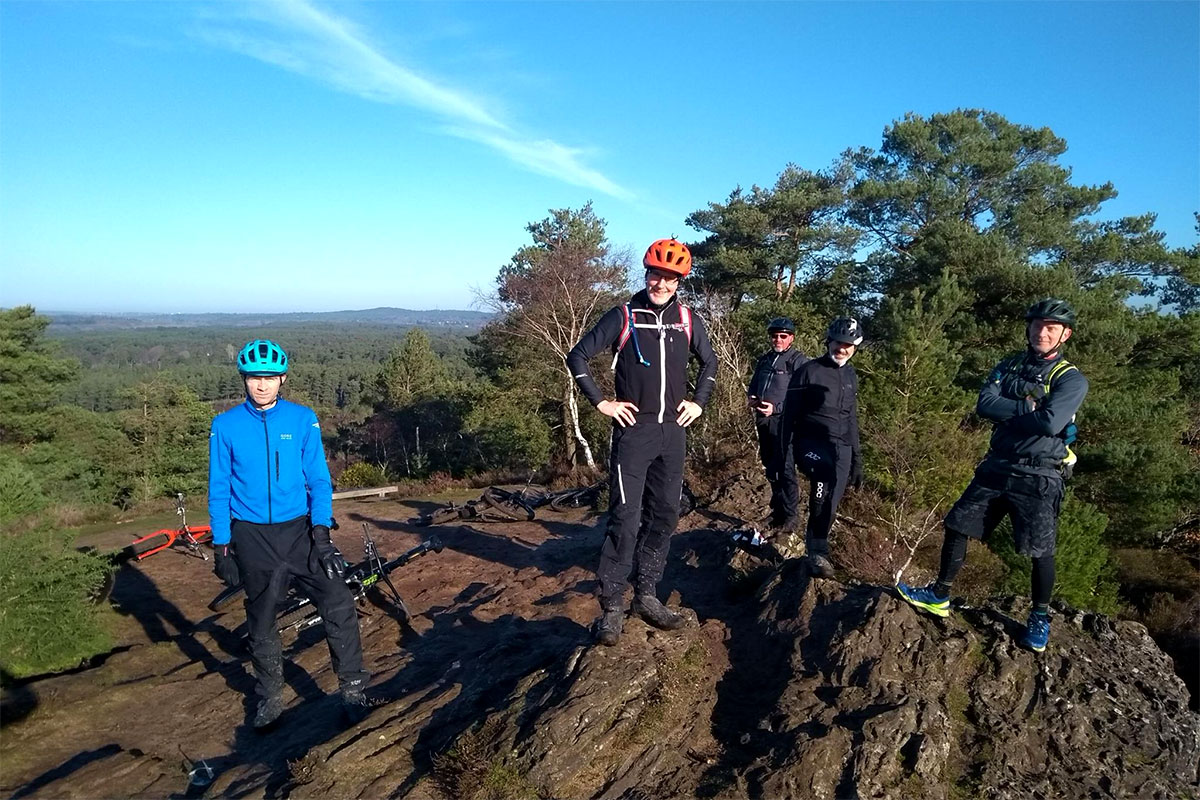 From here it was on toward the Devil’s Jumps, with an ever-steepening climb to reach the summit. The views are worth it with a wide vista before you across Rushmore to the North before a nice precipitate plunge down off the hill. It’s short and sweet but nice and steppy so it keeps you on your toes.

The photo opportunities at the Devil’s Jumps proved Karl’s undoing though. It wasn’t until we’d rolled up to the cafe at Frensham that Karl realised his phone had gone AWOL, and puzzling it out we came to the conclusion that it must have been somewhere between the Devil’s Jumps and Frensham; either at the summit, or in the plunge off the hill. 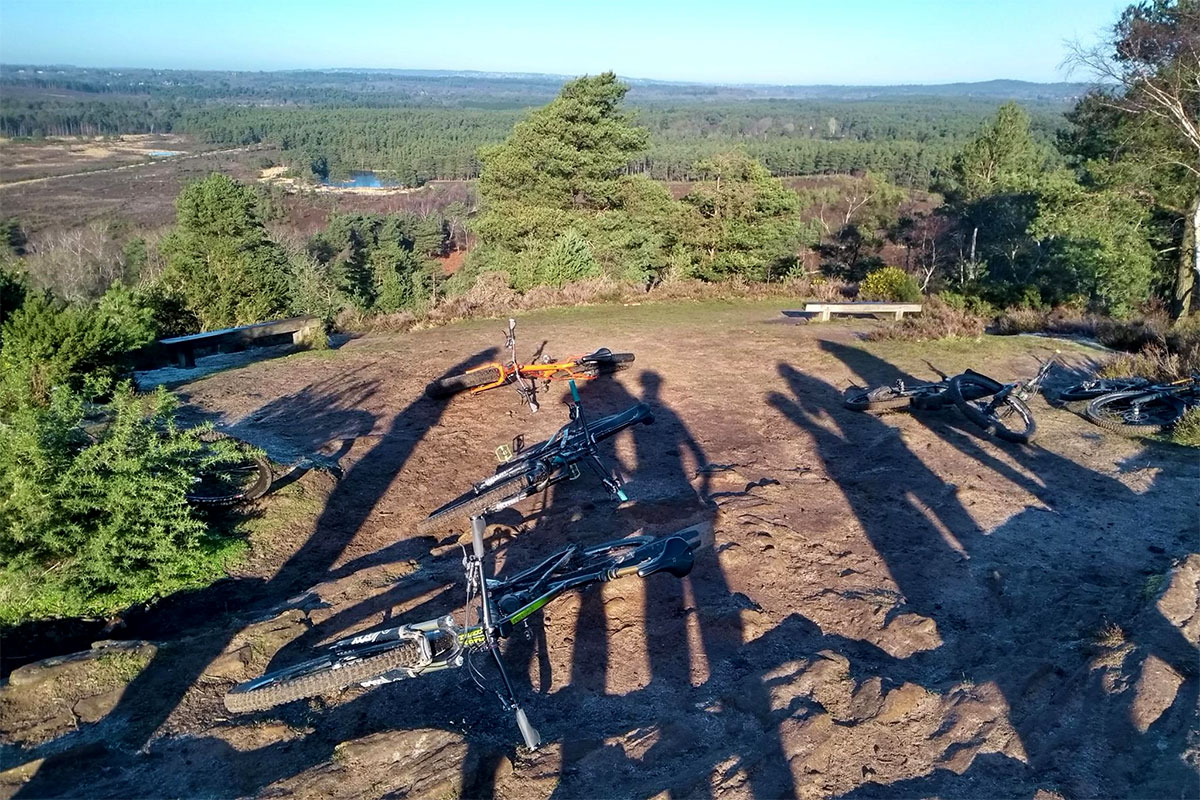 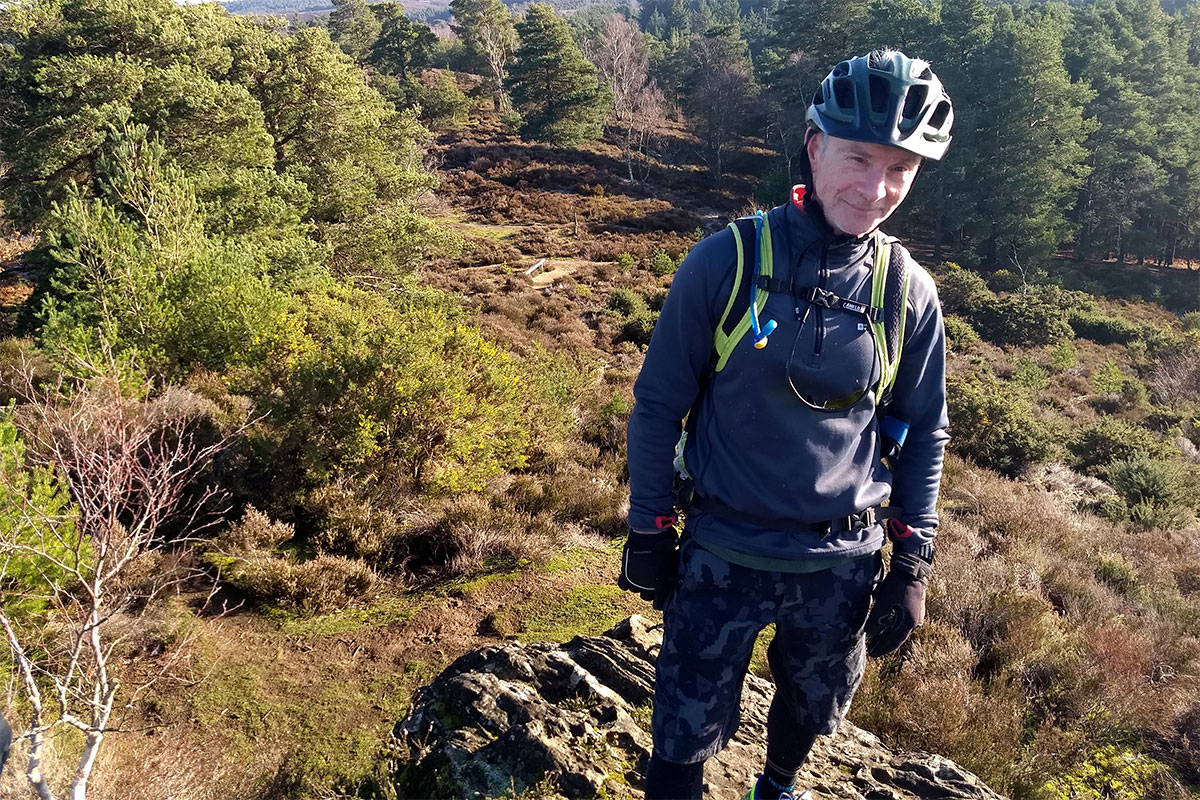 For some time we mulled this over while we drank coffee and ate (I had a very substantial bacon roll!). Most likely we would have to revisit the Jumps but it would be the Devil’s own job to find the phone with the extensive heather covering the hillside.

However, intelligence manifests itself in many ways. After trying to hit up Google’s ‘Find my Phone’ with little success, Jem said ‘I’m just going to ring this and see what happens’. Bingo!

Karl’s phone was promptly answered by a lady who had found it while out on a walk and was now lunching in the Bel and the Dragon pub! She was more than happy to return the phone and very pleased we had called, so we set off for the pub. Improbably, thanks to the goodwill strangers, Karl was reunited with his phone.

The detour marginally shortened our ride but it was worth for the karma involved and a little re-arrangement of our plans a small price to pay. Any route choice was a good choice on a day like this. 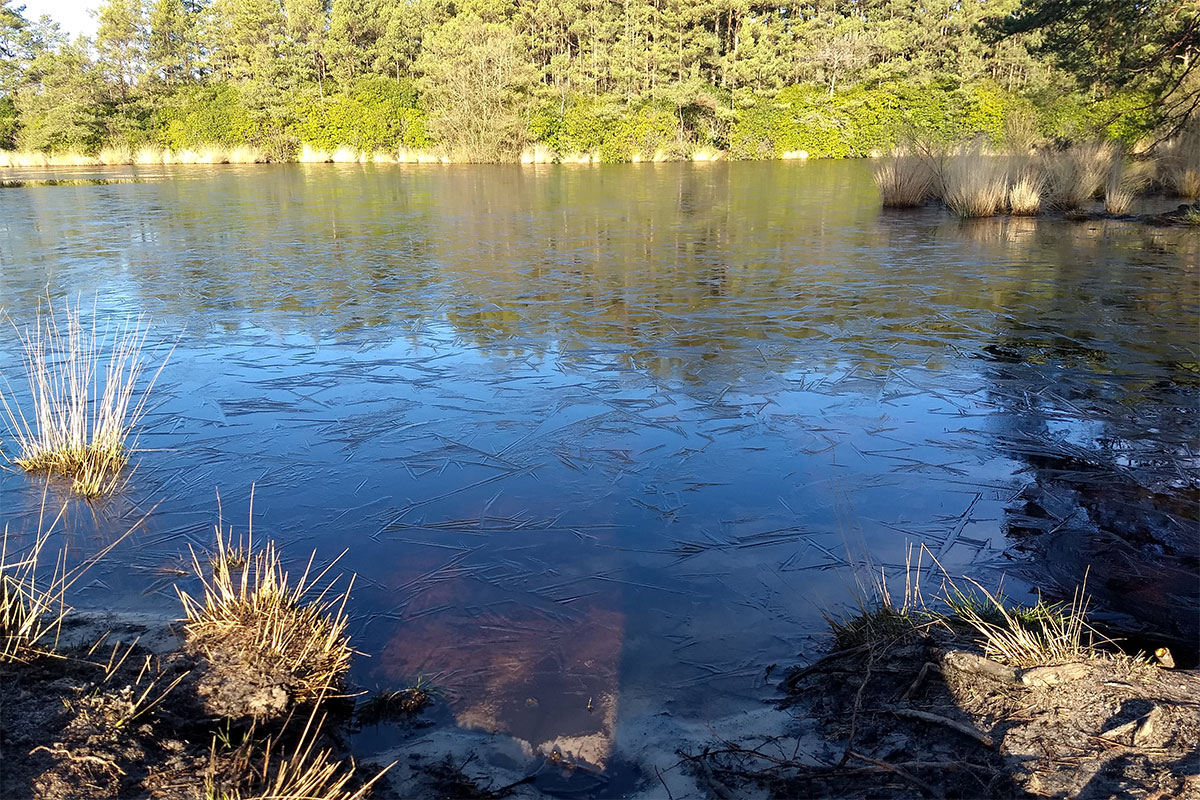 So we worked our way back to Thursley via Truxford and by the end of the ride had notched up just short of 19 miles. That was good enough for us, so we retired to our third stop of the day in the Three Horse Shoes pub for a couple of restorative pints.

That’s two weeks in a row now that the social part of the ride has been as enjoyable as the physical. If I did that every weekend my family would soon let me know their views, but I do like to appreciate these opportunities when I can!

A marvellous way to spend a Sunday.