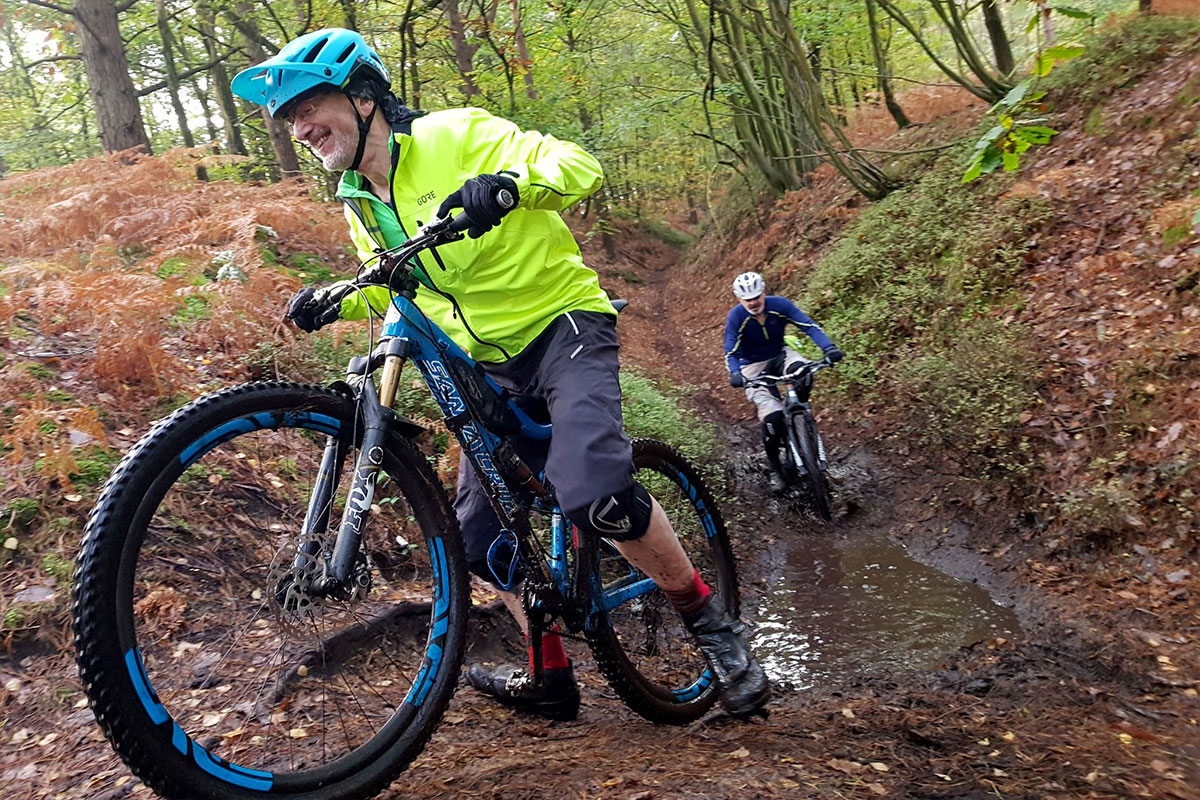 We’ve had a few weeks of rain now and to be honest – that’s all getting a bit old! So it was a welcome relief to ride on a nice dry autumn morning.

Our ride choices weren’t entirely in the lap of the Gods though. After some overnight discussion we agreed that a start from Abinger Roughs would at least mean we could avoid the wet slop to be found on the North Downs ridge. I experienced that to my cost riding into work on Friday morning; it’s very wet and unpleasant.

So Abinger it was, with Holmbury and Peaslake our objective which meant the whole route could have a base of sedimetary rock rather than chalk and clay. This didn’t mean we avoided all the wet though. There remained some bottomless puddles to negotiate, several of which we discovered down Treaders Trail. Yoghurt Pots of course also had it’s fair share but mostly we had conditions to our liking.

Driving to Abinger does mean an early start and it was definitely my turn to offer a lift. So it was that JohnR and I arrived nice and early, which must be a first for John. We were soon joined by Elliot, Lloyd and Karl who was out on a Sunday for the first time in ages. As was I…

We rode through the Roughs feeling the early chill, with Lloyd avoiding an early return when he got a stick caught in his derailleur. By the time we had winched up Paddington Farm though we were feeling warmer and weren’t troubled by the temperatures for the rest of the day except during a visit to the top of the hill itself.

Before that, we passed the Youth Hostel (briefly getting a chance to say ‘hi’ to Danielle of Singletrack School) and then up to Treaders Trail. It’s flow was hampered somewhat by those enormous puddles I mentioned – all black hub-swallowing peaty water – but generally it was good. Round again we went, up to the top of the hill before Yoghurt Pots. 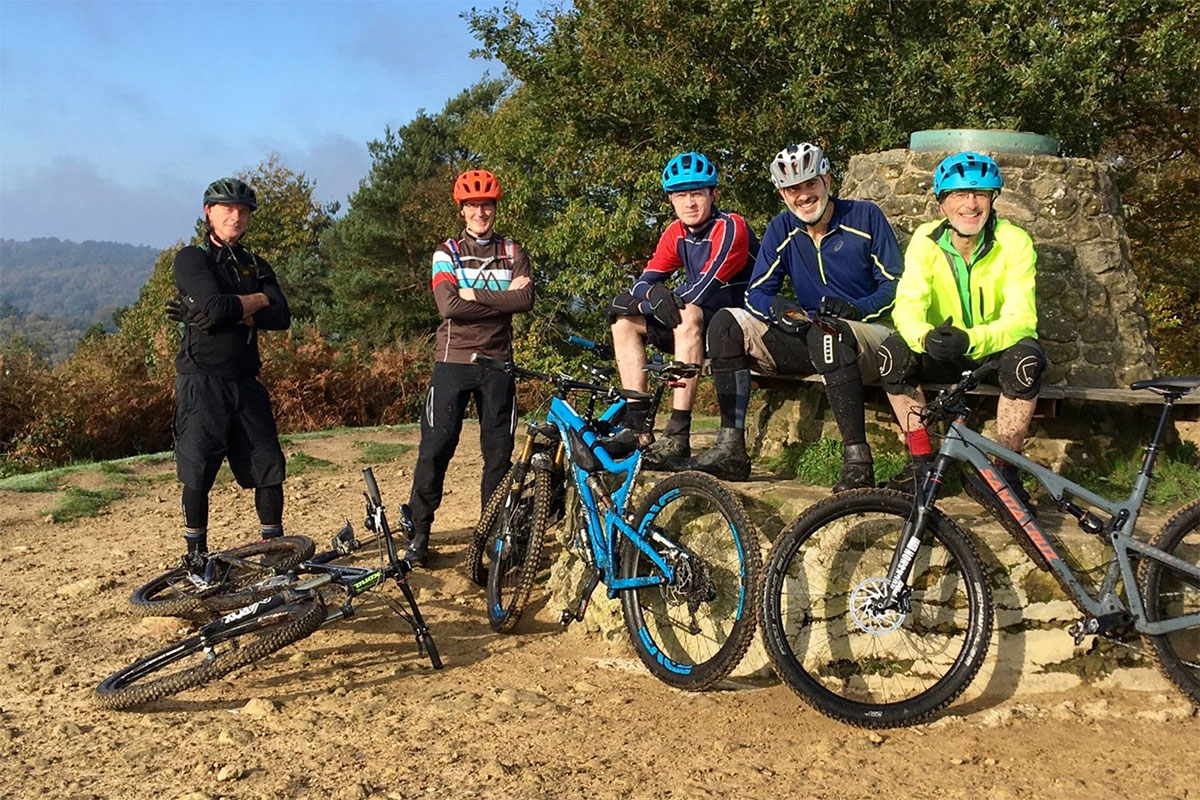 At this point it was apparent that the Mudhugger extension piece for my rear mudguard was next to useless under the duress it got from the trails. Somewhere down Telegraph Road it worked loose entirely which annoyed me partly because I expected more from it and partly because I didn’t see it come off and there’s now a piece of pointless plastic littering the trail somewhere. Grrr!

It’s a shame because the rest of the mudguard is basically pretty good. 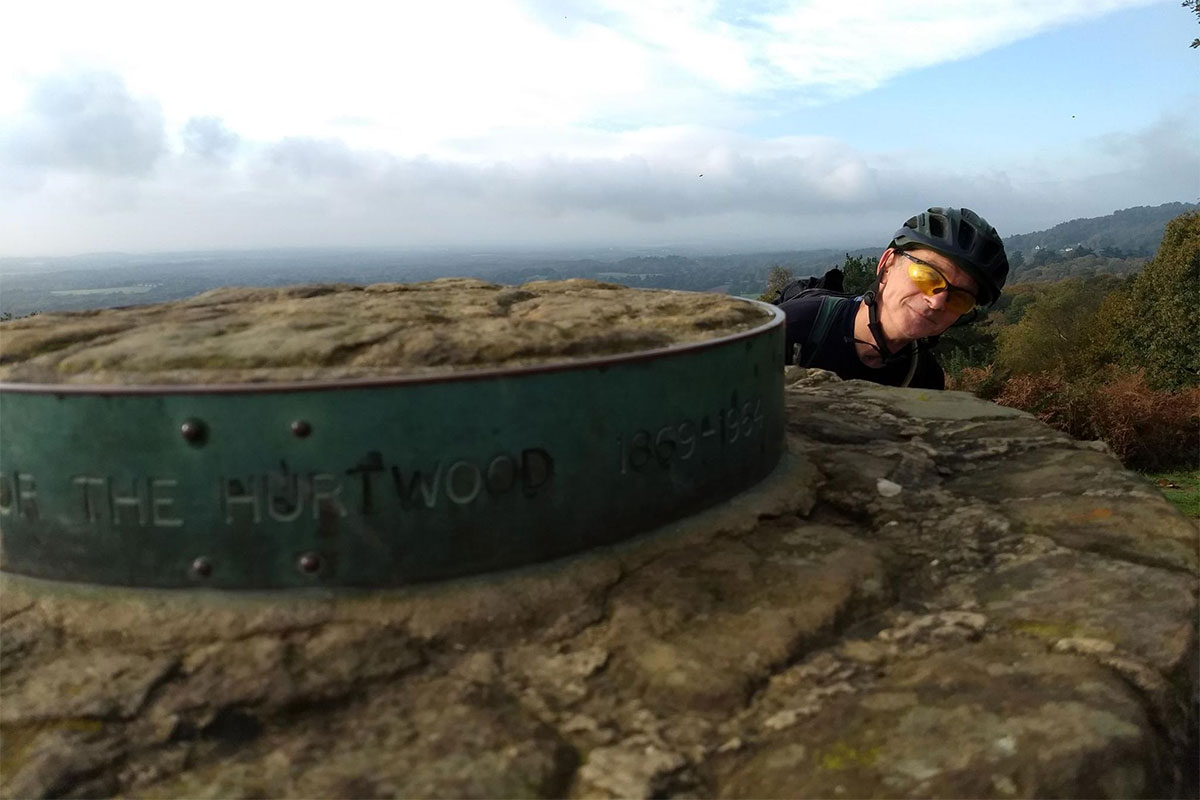 We pressed on, making our way across to the Reservoir and then on to Barry Knows Best. By this stage I was juuust starting to feel tired from my lack of recent trail riding. That was just the start – over the rest of the ride my reserves sadly continued to deplete, which was rather disappointing!

At Peaslake we continued on to the Walking Bottom car park (which was packed!) and then climbed the hill to start our return with Proper Bo. You certainly need to earn your descents round here.

I nearly came a cropper on Proper Bo. As I lined up for the first of the jumps I managed to unclip, a problem I experienced repeatedly today. Most likely it was worn cleats on my Defrosters I think. Anyway, momentarily distracted by suddenly coming unclipped I fluffed my take off and landed heavily on the nose of the Jeffsy and very nearly went straight over the bars. I wrenched my forearm in the process but at least managed a save, thank goodness.

The next section, the Graveyard – which has been nicely scuplted quite recently – was also troublesome. I unclipped two or three more times and my timing was all over the place. Obviously the combination of worn cleats, a low bottom bracket and a lack of trail fitness isn’t really ideal!

At least we had the weather on our side, the early chill giving way to warmer temperatures and welcome sunshine breaking through the haze. We stopped for refreshments at the Stores and bumped into KarlR, another familiar face who told us all about his frankly horrific experiences in hospital following a serious stack in February. Rather him than me!! 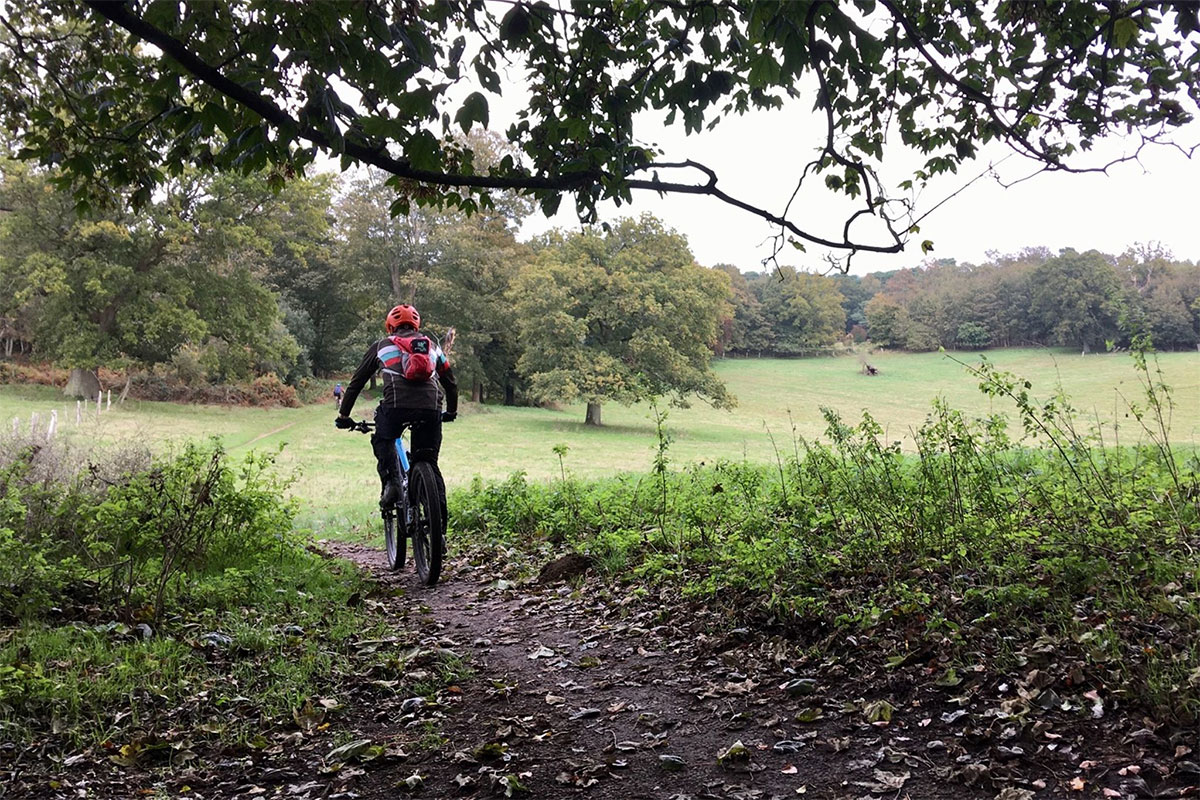 Heading back, we decided on one more climb of the Hill, rather than a return by what was likely to be a muddy Rad Lane to Abinger. During the course of our slow climb (I wasn’t the only tired rider!) we bumped into yet another familiar face in the shape of Lee. He was out solo after a later start on his Stooge. Very nice to see and chat with him too.

Back at the top we did Yogurt Pots again, meeting an extended family of walkers coming up the other way and thankfully not having an accident. We politely explained it was a MTB trail and not for young kids, dogs and grandparents on foot going the other way!

I was really tired by now, so was happy for us to finish off with tackling Telegraph Road once more before turning off for Au Naturel.

From there it was largely downhill all the way back to the cars if you can ignore a couple of sharp climbs. I was certainly doing my best to ignore them! At the finish we just about clocked 18 miles and could claim another enjoyable ride logged.

Filed under Rides in October 2019