Is there anyone out there who wants a mudguard on their bike? As opposed to most of us needing one?

No, I didn’t think so. Let’s face it, mudguards are not the most desirable item you could adorn your bike with. I know people who swear off them completely for the road (you really don’t want to ride behind them on a wet road) and I know people who would much prefer not to have anything on their MTB either. Spoils the look daaaahling!

In part, this is why we have a trend for waterproof shorts and trousers. It’s a second level solution to keeping dry and sort of clean. But avoiding mudguards purely for aesthetic reasons is not the full picture. With modern long travel full suspension bikes and dropper posts, it’s not easy to fit a conventional mudguard anyway.

Now, I have run other mudguards in the past on my Jeffsy because even if waterproof trousers keep you dry, you still get mud and cack on you. That muck tends to ruin your saddle, shorten the lifespan of the trousers and is a mess during cafe stops.

The trouble is, with a conventional mudguard on a full sus machine you have trouble mounting it round the dropper post base if there’s not much sticking out of the frame and you have trouble mounting the thing high enough to clear the rear wheel if you reach full travel (or even sometimes just halfway into the travel). That rear wheel buzz is just annoying! And the bike tends to look odd with a big scoop sticking up out of the back. 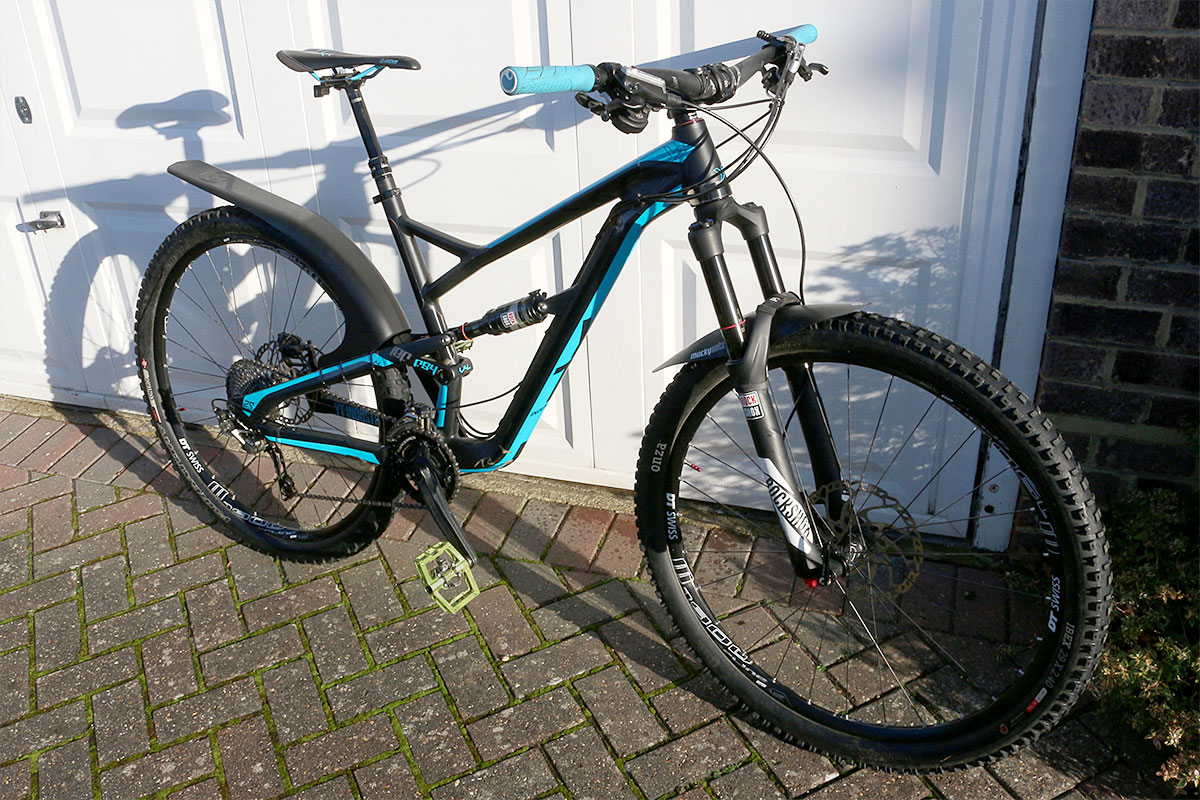 What about the Mudhugger then?

Funnily enough, this is where the Mudhugger rear mudguard comes in. Unlike a conventional mudguard, it suits both hardtail and full sus machinery rather well. It mounts to the seatstays and shields the rear wheel quite closely, although not so closely that the mud builds up (unless you are unlucky enough to find some Bastard Glue Mud™ such that Surrey can provide – in that case, you’re stuffed anyhow!).

The Mudhugger rear mudguard is made from tough and structurally solid plastic and comes in a couple of sizes – you’ll want the 29er version for anything over old skool 26″ wheels according to Mudhugger. You might also want the separate 100mm extension if your seatstays happen to be low slung, as the low angle effectively shortens the coverage of the mudguard.

How is the Mudhugger rear mudguard mounted?

It turns out to be pretty easy to fit the mudguard. The hardest part I found was getting a day warm enough for me to potter in the garage.

First you put protective helitape (supplied by Mudhugger) on your seatstays, which can be a bit faff-y but is worth it to protect your paintwork and is almost invisible once applied. I radiused the corners of the tape to help it resist lifting over time.

After that, the Mudhugger is attached using strong cable ties (also supplied) – get it roughly aligned, then cinch them all as tight as you can. Once tightened down, the mudguard is not going to move anywhere! 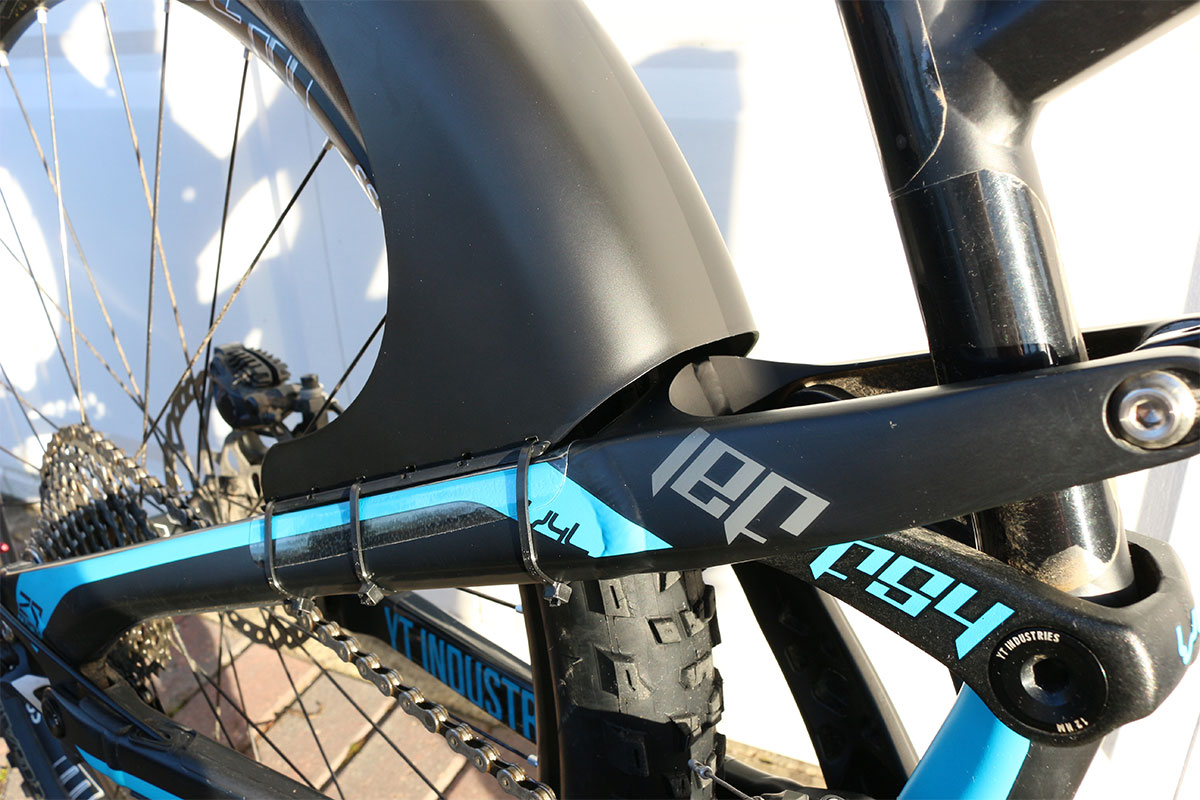 First of all, the Mudhugger really doesn’t move, as ChrisP noted on our Christmas ride. No flapping, no wobbling and thus no noise or rattles either. I’ve pushed the bike down a very rattly Yoghurt Pots and Telegraph Road and the mudguard just stays in place – it hasn’t moved an inch.

It also clears my seat-tube – I got full travel on the Jeffsy and there was no problem and no annoying wheel buzz, so I am very pleased with it so far. It’s also worth noting that I initially though the Mudhugger would look a bit bulky but in practice it doesn’t really draw much attention to itself.

My only issue is related to the Jeffsy as much as anything – the seatstays are low and while the mudguard cuts out 90% of mud, there’s still a small amount that gets to my backside and the bottom of my Camelbak. JR has the same mudguard on his hardtail fat bike and on the same ride he had absolutely no mud on him at all, so I can tell it’s the low seatstays that are the culprits. 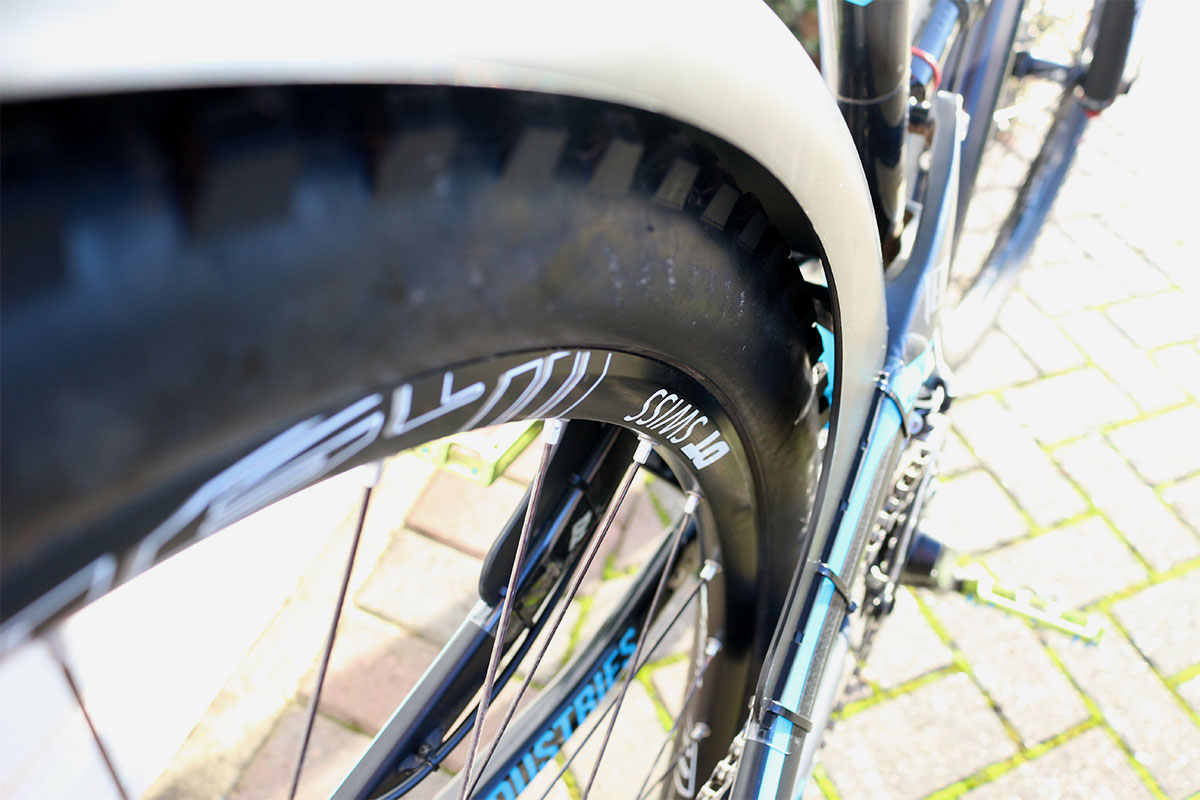 That might not bother you as the performance is pretty good anyway but I plan to purchase the extension to cut out the last 10% of mud. I’d like Mudhugger to produce a longer version straight out of the box that would track the larger wheel size better and this one fit 26 and 27.5″ wheels. Then you could do without the need for an extension under most circumstances.

I also wish I’d bought some lime green stickers to funk it up a little and pick up the lime of my pedals, but I was being stingy!

Overall, a definite thumbs up from me.

Filed under Accessories, Reviews in January 2019