Yes, it’s been a while hasn’t it? Too much work means no time for writing ‘stuff’, arguably a loss to us all…

For those of us who are time-poor – by which I mean those of us not retired – the priority has been riding. Working, and riding. And we’ve actually done a lot of both; I have over 2,500 miles on the clock so far this year. This was not helped by contracting Covid recently, but fortunately it wasn’t too bad. I’d begun to think I was immune but it turns out I just don’t have the social life I thought I had!

Anyway, it’s summer season. A time to maximise daylight and dry weather of which there has been a lot. The the countryside in general is tinder-dry and has been since before our record-breaking 40° heat last week. Hankley Common has been on fire, a part of Leith Hill has been on fire and the trails are simply dust.

This weekend we managed something a little different to our diet of winch and plummet riding over the Surrey Hills and headed down to the New Forest for a day of gravel riding. This was prompted by an article I read about gravel riding in the New Forest which kick started an idea.

It turned out other Moles shared my curiosity. Some of us have been riding ‘gravel’ mid-week for a while, by which I mean not just gravel bikes but re-purposed MTBs on skinny tyres on a mix of tarmac and tame trails. It’s been fun to explore places on our doorstep that we’ve overlooked in the past and is really an extension of lockdown wanderings from the pandemic.

A bit of a search on RideWithGPS turned up loads of gravel routes around the New Forest and pretty soon we had a plan. A 45 mile pretzel around Lyndhurst as a gravel taster. 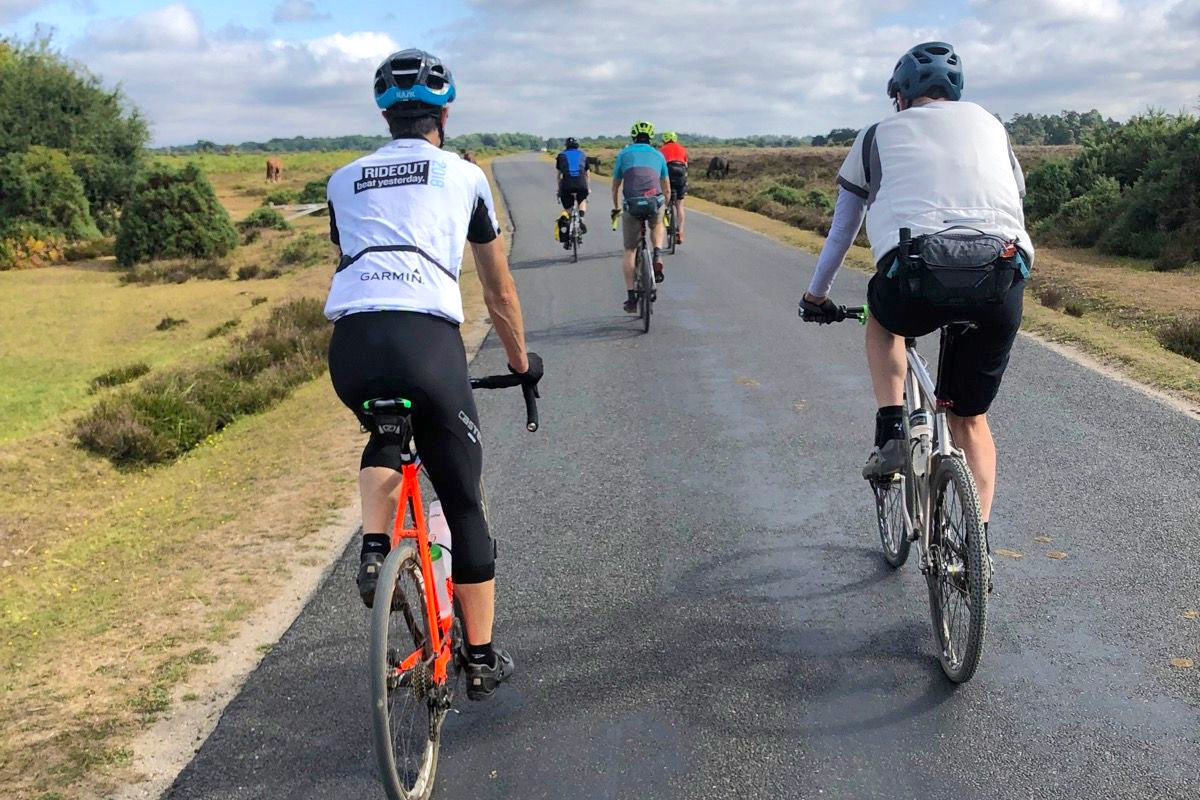 Our plan was to start from the Andrews Mare car park which is just off the A31, so it’s very easy to get to. Within a few hundred yards you are driving down gravel roads and largely that’s how it stayed for the whole day. One thing worth noting perhaps is security – it’s a very quiet spot that’s very easy to get to (and presumably away from), a point re-inforced when we returned hours later to find the police had put ‘no valuables kept in cars’ cards under our windscreen wipers to warn us.

Our ride group consisted of MarkC, MarkJ, Lloyd, Gordon, AndrewK and myself with a late no-show from the Prof and Karlos due to back pain. Tony was also away (en France), and others – including JR – were otherwise engaged, but I think all would enjoy this ride and hopefully there will be a next time. The key stats for the group were:

First impressions were that the ground was pretty bumpy. I was thinking 45 miles of this would be quite punishing but it was only a half mile or so to the actual trails after which it was generally pretty good. My gravel bike runs 38c Specialized Pathfinders which were ideal in terms of grip but are a little low in volume. I maintain that the ‘ideal’ gravel tyre is about 42-45c with whatever tread suits the surface you are riding on, a point I will address when these tyres need replacing. But they have done 5,100 miles now and still going strong. 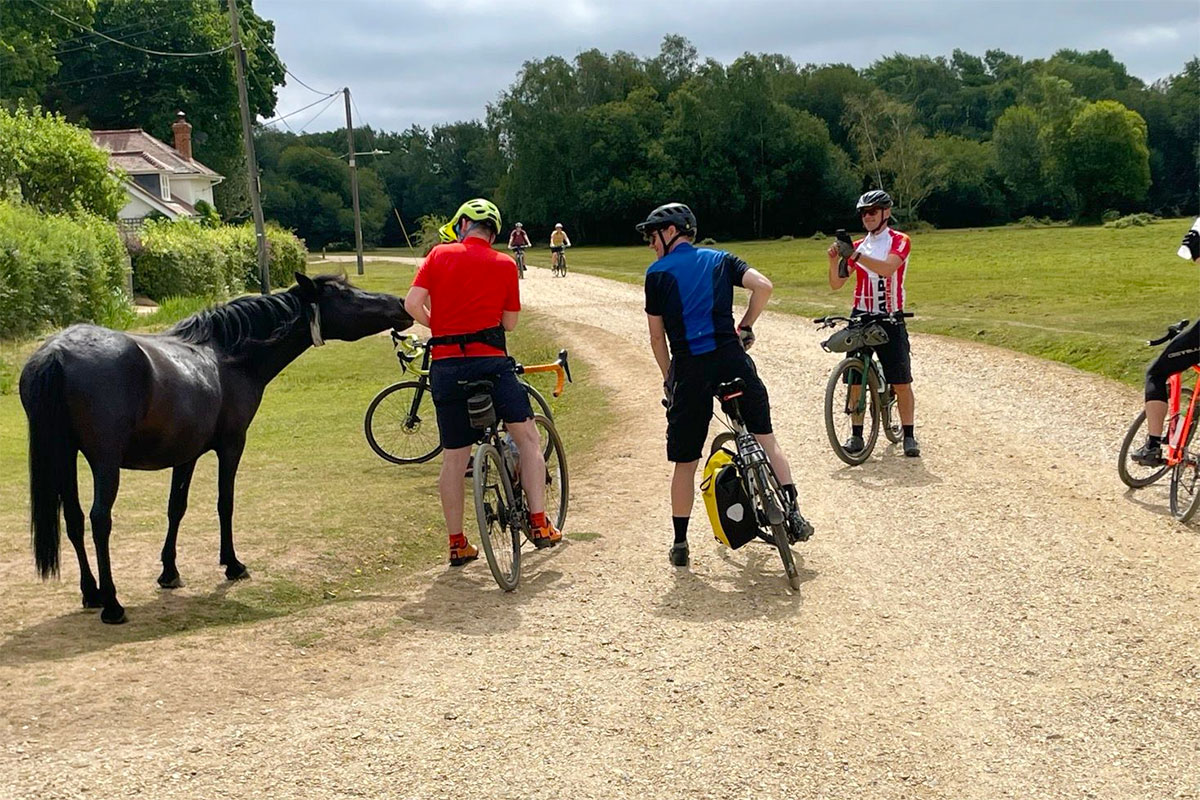 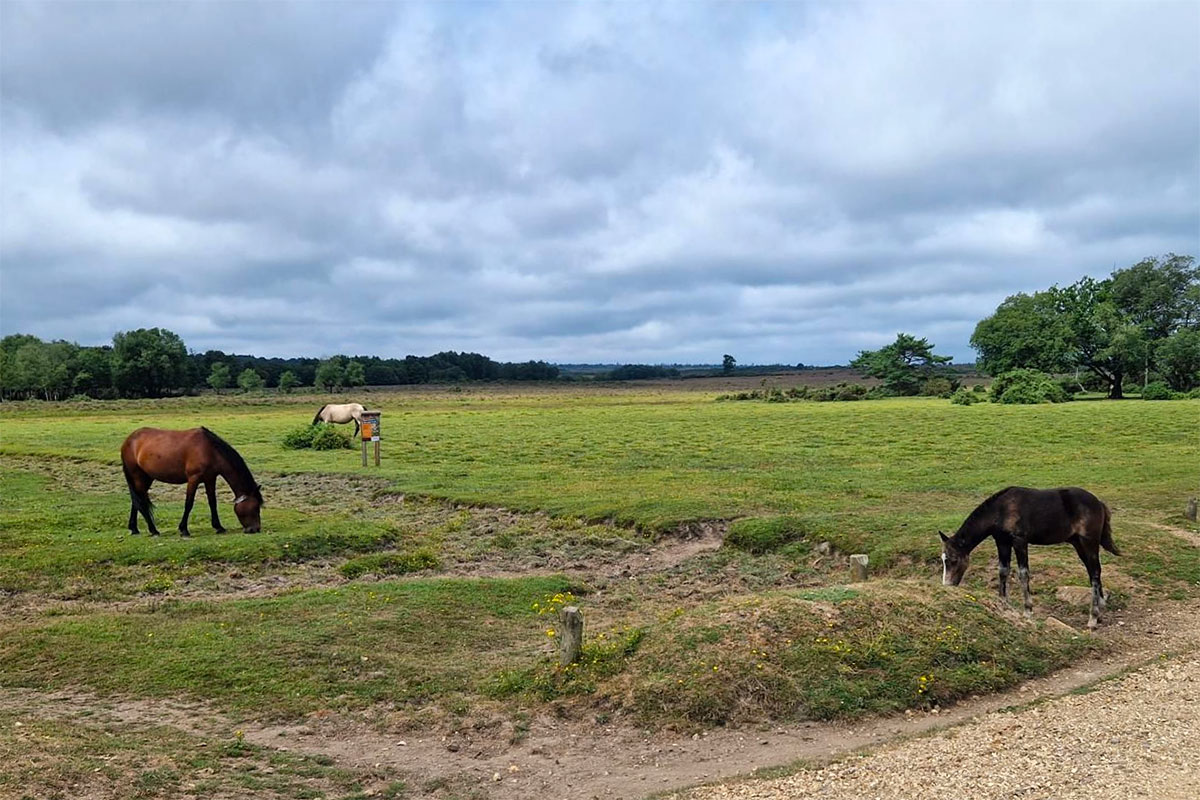 The day was mercifully cooler than earlier in the week and with average temperatures of about 21-22° it felt quite comfortable. You spend a good part of the day in full sun though and if the weather is inclement you would be quite exposed with a strong chance of headwinds/tailwinds/crosswinds. Worth bearing in mind. Other parts of the ride take you through deeply wooded areas so that overall the split is probably about 50:50.

The trail surface is mainly compacted gravel, sometimes quite loose and deep on turns so watch out for that. We weren’t attacking the route but higher speeds might catch you out occasionally. We also suffered three punctures on the day, unheard of for MTB in Surrey these days. Admittedly, Andrew had a tube in his gravel bike but both Lloyd and Gordon punctured tubeless tyres so the gravel and paths can be quite sharp. Fatter XC MTB tyres would probably shrug things off quite easily though.

At Brockenhurst we stopped for a coffee and cake and randomly picked The Terrace for our refreshments in the centre of town. This… wasn’t a mistake exactly but…

So the moral of the story is plan your stops! 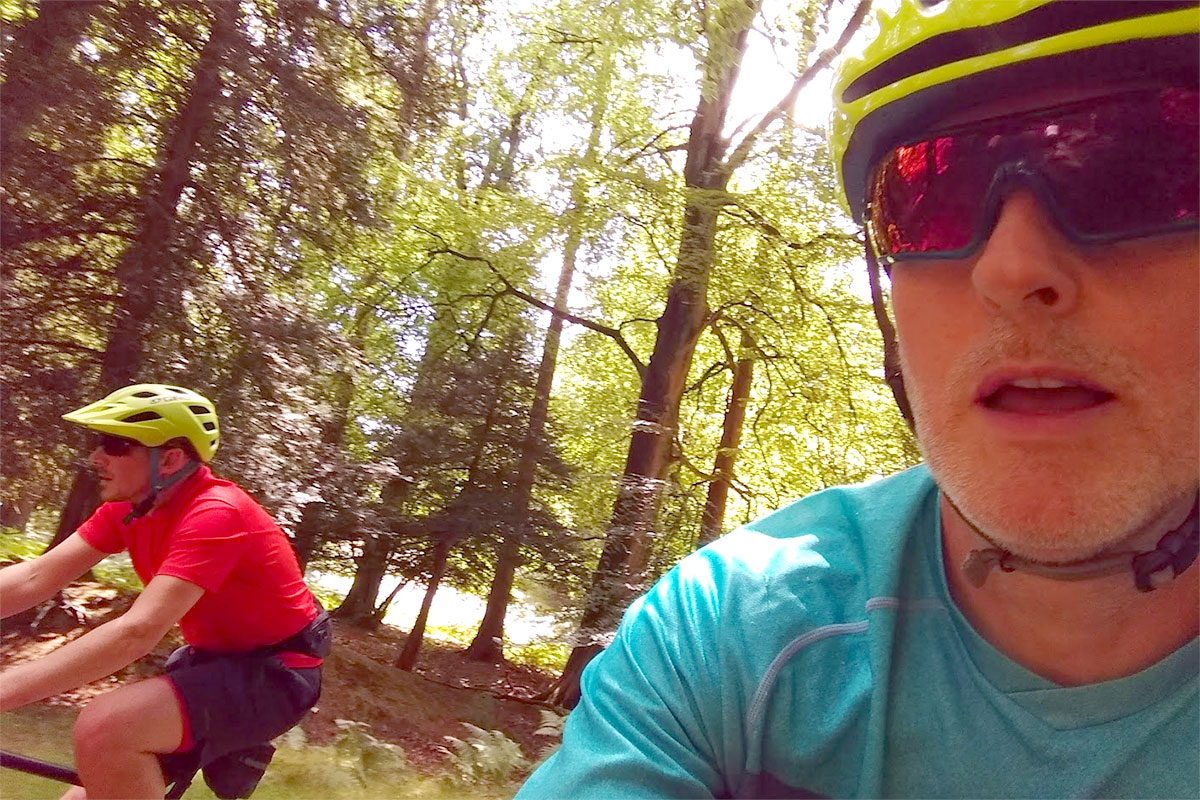 After our break we continued on, saw more of the New Forest wildlife (ponys of course, plus deer and cows) and I feel we thoroughly enjoyed ourselves. The day saw us reach a total of about 2,300 feet of climbing which is not a lot over 45 miles, but as I say you could easily exhaust yourself trying to go a lot faster. That just wasn’t our modus operandi to be honest.

The ride finished at The Trusty Servant in Minstead not far from our cars, where we stopped for a pint and late lunch in the sunshine. I could have had two or three quite easily but even so was grateful to Lloyd for driving as I couldn’t stay awake on the journey back to Surrey! 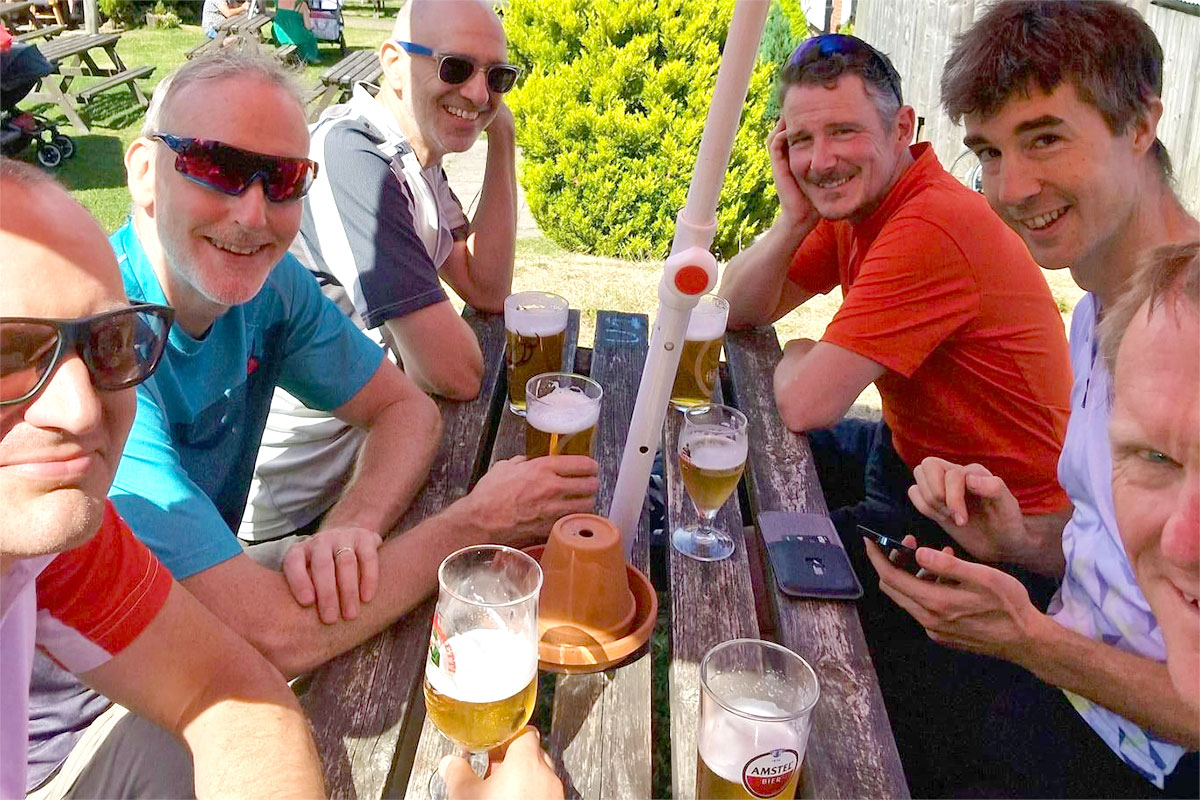 It certainly made a pleasant change to our regular riding and clearly we have only just had a taster of New Forest riding as we should be able to reach the coast quite easily. I’m sure we will be back to explore further. 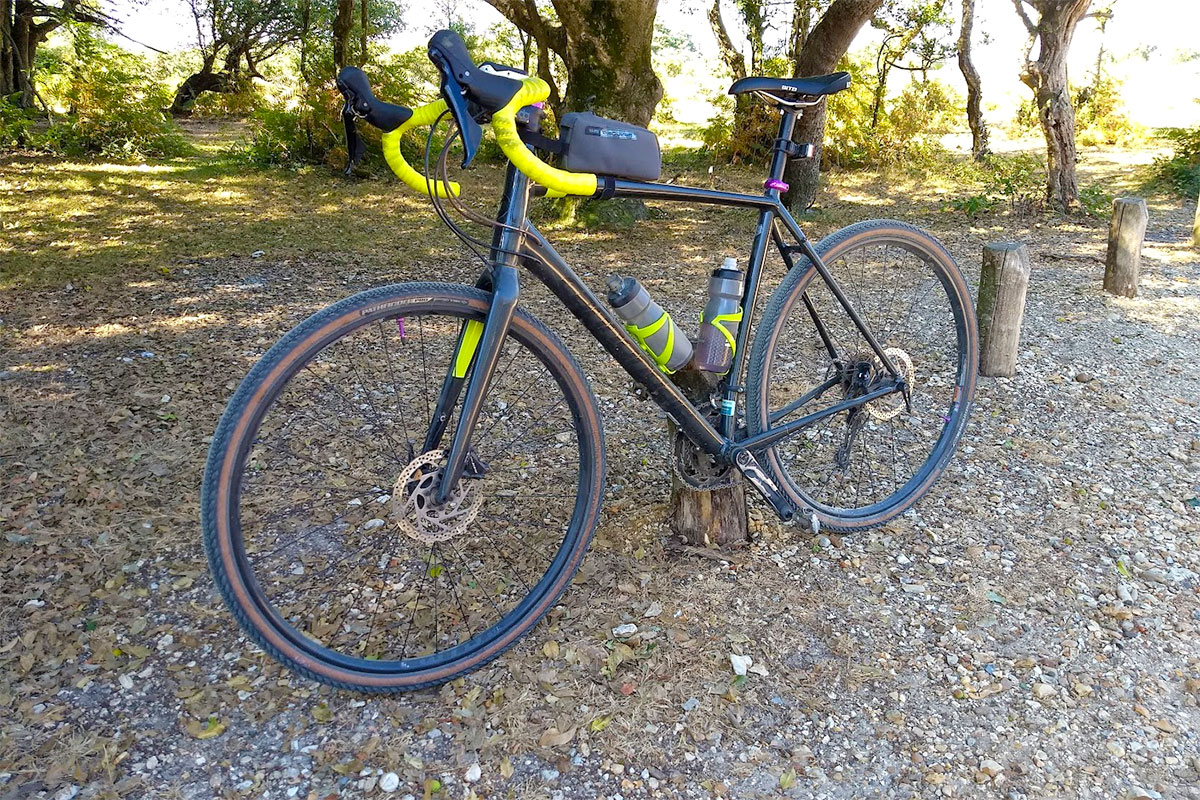 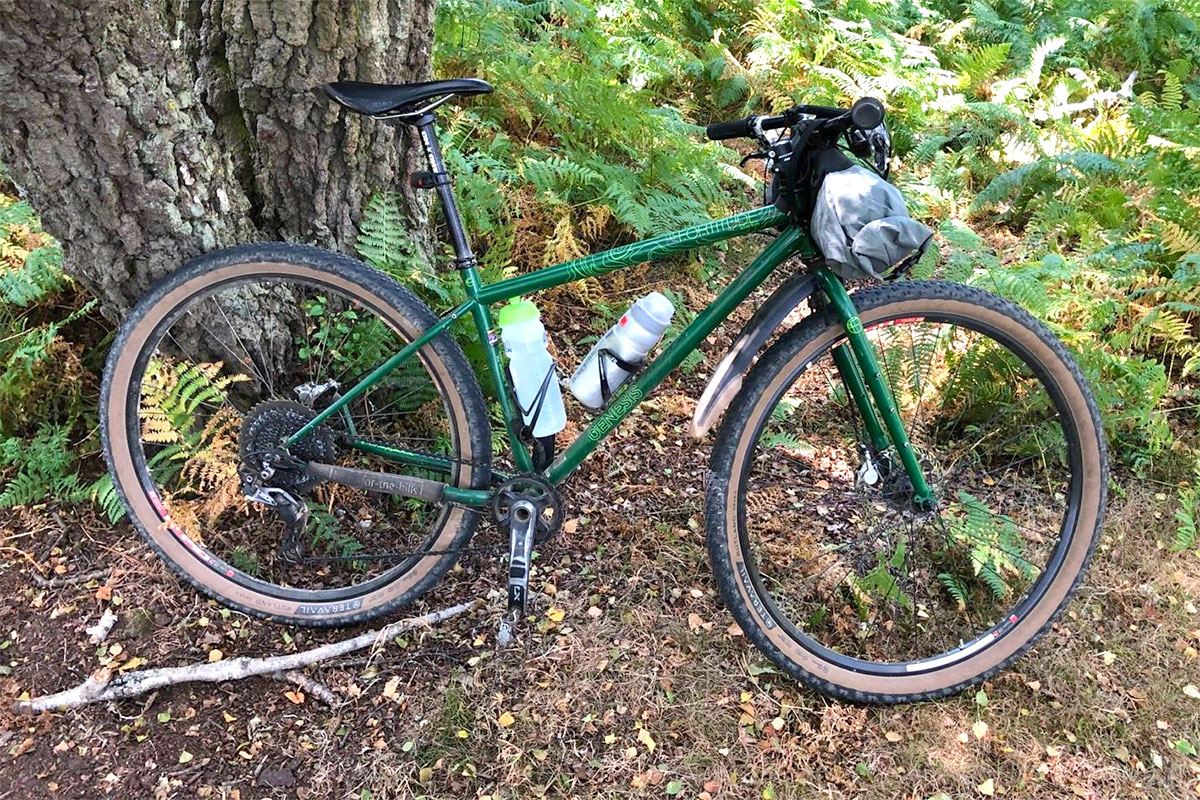 Filed under Rides in July 2022